I always believed that defensive players might be undervalued compared to offensive ones, especially in the Premier League. Now, this was just a point of view, but this time, I thought, I would try to use data to figure it out!

This way, I was able to close, once and for all (a man can dream…) the debate. Also, as a bonus, you’ll see what your favorite Premier League Team should invest in according to this model.

How do goals scored impact the point tally of a team?

First, I wanted to see if my work was relevant whatever the league I choose as a case study. So I took the last 5 seasons (not including the current one) for the 5 biggest European leagues. I plotted the goal difference against the point tally of each team, adjusting the Bundesliga because teams only play 34 matches per season. 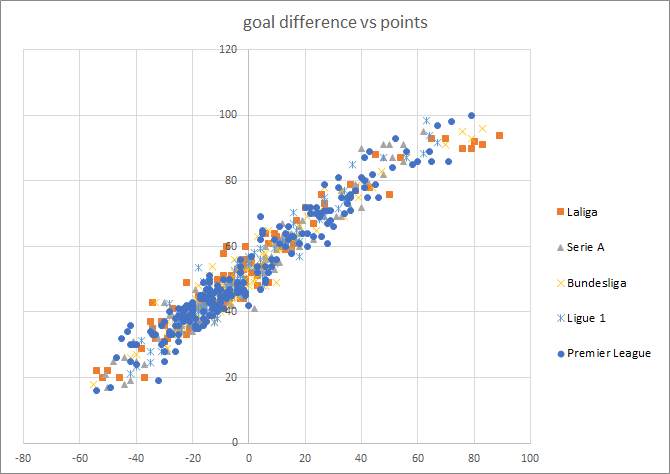 As you can see, there is no difference between the leagues. Improving your goal difference always improves your point tally to the same extent regardless of the league you play in. I did choose to focus on the Premier League from then on, but thanks to this analysis, you’ll know the conclusions can be applied to other leagues too.

My next concern was that if there had been any change in the last seasons in this relation, to know if my takeaway will also be appliable to the future. So I took the last 10 seasons of the Premier League, and as you can see below, no difference can be spotted.

That’s great, we can conclude that the value of a goal doesn’t change, even if you switch the league or the season.

Next, to come closer to our subject, I wanted to see if a goal scored earns you as many points as a goal conceded loses. So I plotted the Goal For and Goal Against of every Premier League teams in the past 5 years and compared it to the points earned. 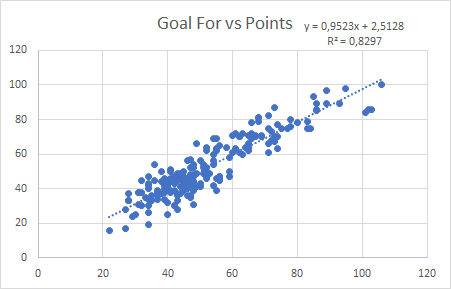 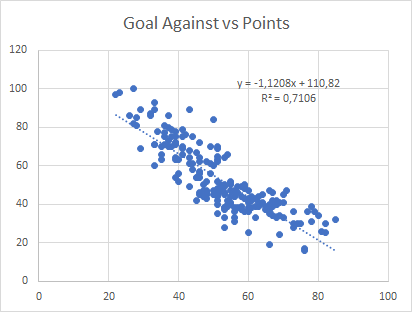 As you can see, a goal scored for you earns you slightly fewer points than a goal avoided against you in average: 0.95 points against 1.12 points. So on the whole, it’s better to avoid a goal than to score.

How does a team valuation correlate with its Goals For and Against?

For each team of the last 5 years of the Premier League, I counted the following players as the defensive players: goalkeeper, defender, defensive midfielder, and the other one as attacking players.

I summed up the transfermarkt values of the players to get the defensive value of the team and did the same for the attacking players. I then compared each value to the league average that season.

Having done that, I could plot the goals scored as a function of the offensive value of your team, 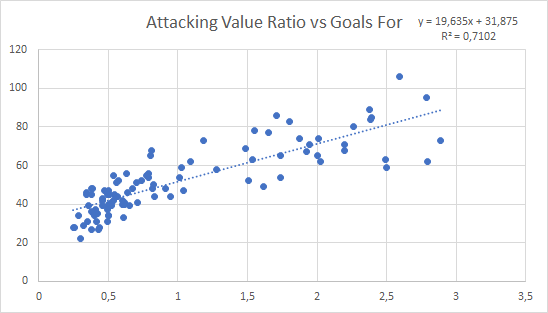 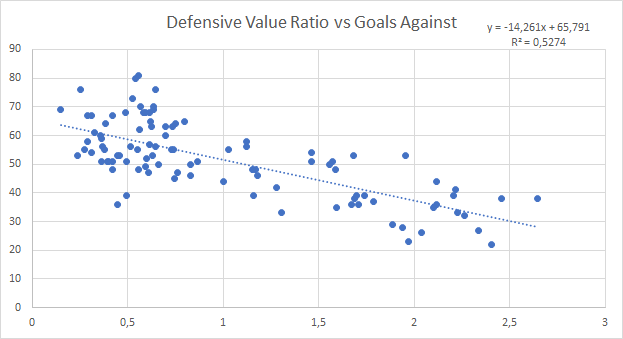 If we combine both results, we can say that improving your team offensive value by 10% will earn you 1,87 points on average when doing the same in defense would only earn you about 1,60 points.

That being said, attackers are valued higher, so we should not only look at the relative augmentation like we just did, and consider the absolute value.

Last year, the total attacking valuation in the Premier League was around 4684 M€ when the defensive was 3294 M€.

This is my conclusion: Yes defensive players are undervalued, probably to the extent of around 20%.

The logic Follow Up question is: Why is that?

Why are defensive players undervalued?

The first reason I can think of is star power: an offensive player is always more flashy and will sell more jerseys, perhaps get you more sponsors… All the valuation of a player is not linked to its sportive value.

But there is one other reason that I wanted to show you: The effect of a better defense is not as deterministic as a better offense.

If I plot for each team the difference to my model, you can see that there is less spread when it comes to attack. So a defensive improvement will improve your team most of the time, but sometimes it will have no effect or even a negative effect on your team overall whereas a good attacking player will almost always improve your attack. 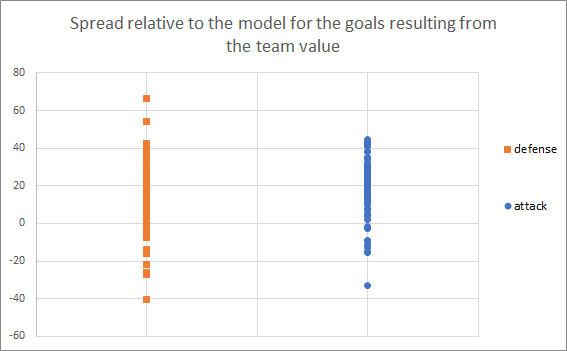 Investing in offensive players is more reliable when it comes to results, even though these results are on average slightly worse than for defensive players.

V. What should my team invest in?

It’s not because a defensive investment is most of the time better for a team that is the case for every team.

Below you’ll find what I think each Premier League team should invest in, according to the latest values of their teams. Example: Sheffield would get 31% better results for every M€ invested in attack compared to defense. 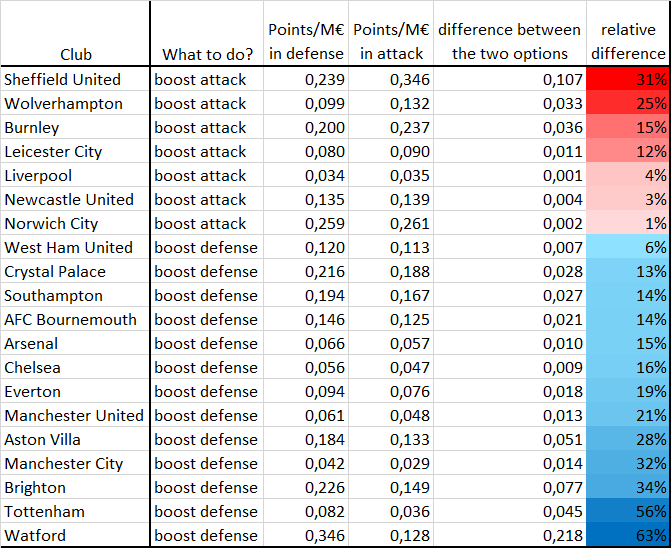