It’s been another eventful year in the world of football. As we look forward to 2020, we have compiled a list of the best football books of 2019. The list includes books on football history, tactics, politics and much much more.

Ever wondered which goal Frank Lampard is proudest of, who Jürgen Klopp thinks will manage Liverpool in the future, what Rio Ferdinand thinks of Man United in the post-Ferguson years or exactly how many grey cashmere jumpers Pep Guardiola owns? In this collection of frank and funny conversations between footballers and their biggest fans, these vital questions (and many more) are finally addressed.

A Game of Two Halves shows a different side to some of the biggest names in football, reminding us of the common ground we all share. This project is published in partnership with UNHCR, the UN Refugee Agency, with the goal of raising both funds for and awareness of their work with child refugees.

Red Card: FIFA and the Fall of the Most Powerful Men in Sports 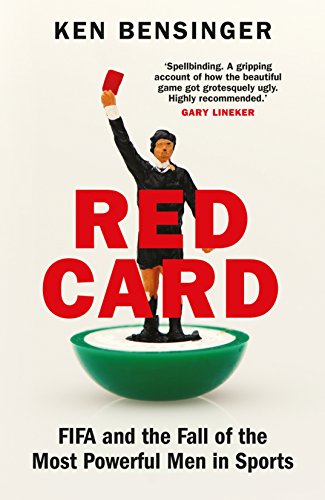 The story of FIFA’s fall from grace has it all: power, betrayal, revenge, sports stars, hustlers, corruption, sex and phenomenal quantities of money, all set against exotic locales stretching from Caribbean beaches to the formal staterooms of the Kremlin and the sun-blasted streets of Doha, Qatar.

In Red Card, investigative journalist Ken Bensinger takes a journey to FIFA’s dark heart. He introduces the flamboyant villains of the piece – the FIFA kingpins who flaunted their wealth in private jets and New York’s grandest skyscrapers – and the dogged team of American FBI and IRS agents, headed by Attorney General Loretta Lynch, who finally brought them to book. Providing fresh insights on a scandal which has gripped the world, he shows how greed and arrogance brought down the most powerful institution in sporting history.

A wild, gritty, gripping, and at times blackly comic story, Red Card combines world-class journalism with the pace of a thriller.

The Age of Football: The Global Game in the Twenty-first Century

In The Age of Football, David Goldblatt charts football’s global cultural ascent, its economic transformation and deep politicisation, taking in prison football in Uganda and amputee football in Angola, the role of football fans in the Arab Spring, the footballing presidencies of Bolivia’s Evo Morales and Turkey’s Recep Erdogan, China’s declared intention to both host and win the World Cup by 2050, and the FIFA corruption scandal.

Following the intersection of the game with money, power and identity, like no previous sports historian, Goldblatt’s sweeping story is remarkable in its scope, breathtaking in its depth of knowledge, and is a brilliantly original perspective of the twenty-first century. It is the account of how football has come to define every facet of our social, economic and cultural lives and at what cost, shaping who we think we are and who we want to be.

They Dont Teach This

All of these achievements belong to Eni Aluko, who, is keen to share her experiences, aiming to inspire readers to be the best possible versions of themselves. Aluko was appointed UN Women UK ambassador with a focus on promoting gender empowerment in 2016, and in October 2018 she was named by Marie Claire as one of ten Future Shapers Award Winners, recognising individuals who are changing women’s futures for the better. She is currently playing football for Juventus in Italy and writing a weekly column for the Guardian.

They Don’t Teach This steps beyond the realms of memoir to explore themes of dual nationality and identity, race and institutional prejudice, success, failure and faith. It is an inspiring manifesto to change the way readers and the future generation choose to view the challenges that come in their life applying life lessons with raw truths of Eni’s own personal experience.

The Barcelona Legacy is a book in part about tactics, about how the theories that underpin the modern game were forged by Cruyff and his successors, but also about the people and personalities who gathered at the Camp Nou for what was effectively the greatest coaching seminar in history, about their friendships and rivalries and, in one case, an apocalyptic falling out that continues to shape the game today.

In 2016, a whistle-blower known only as ‘John’ started to leak a treasure trove of top-secret files to German newspaper Der Spiegel. These documents reveal the clandestine dealings of clubs, players and agents at the highest echelons of international football. And the story they tell is astonishing.

From the eye-popping details of player transfers, including Neymar Jr, Pogba and Coutinho, to the loopholes and opaque tax structures that ensure maximum earnings for players and agents alike, this is a tale rife with rapacious greed and questionable deals. At the same time, it is the gripping story of a fan who wanted to free football from its corrupt overlords – and now finds himself on the run.

Building the Yellow Wall: The Incredible Rise and Cult Appeal of Borussia Dortmund

Towards the beginning of the twenty-first century, Borussia Dortmund were on the verge of going out of business. Now they are an international phenomenon – one of the most popular clubs and fastest-growing football brands in the world. Every fortnight, an incredible number of foreigners eschew their own clubs and domestic leagues and travel to Dortmund to watch football, while people from all corners of the world dream of doing the same – of standing on the largest terrace in the world, the Yellow Wall.