It’s been another eventful year in the world of football. As we look forward to 2018, we have compiled a list of the best football books of 2017. The list includes books on football history, tactics, politics and much much more.

Béla Guttmann was the first of a breed of globetrotting superstar football coaches, achieving his greatest successes before Pep Guardiola or José Mourinho were even born.

He was also a Holocaust survivor. In 1944, much of Europe had wanted Guttmann dead. He hid for months in an attic near Budapest as thousands of fellow Jews in the neighbourhood were dragged off to be murdered. Later, he escaped from a slave labour camp before a planned deportation and almost certain death. His father, sister, and extended family were murdered.

But by 1961, as coach of Benfica, he had lifted Europe’s greatest sporting prize―the European Cup, a feat he repeated the following year. From the death pits of Europe to champion of Europe in little more than sixteen years, Guttmann performed the greatest comeback in football history.

An extraordinary and compelling account of the life of football coach Béla Guttmann.

An absolutely essential book for every modern football fan, about the development of Premier League tactics, published to coincide with 25 years of the competition.

Back in 1992, English football was stuck in the dark ages, emerging from a five-year ban from European competition. The game was physical, bruising and attritional, based on strength over speed, aggression over finesse. It was the era of the midfield general, reducers, big men up front and getting it in the mixer; 4-4-2 was the order of the day. Few teams experimented tactically.

And then, almost overnight, it all changed. The creation of the Premier League coincided with one of the most seismic rule changes in football history: the abolition of the back-pass. Suddenly defenders had no-get-out-of-jail-free card, goalkeepers had to be able to field and play the ball and the pace of the game quickened immeasurably. Tactics evolved dramatically, helped by an increased foreign influence.

The Mixer is the first book to delve deep into the tactical story of the Premier League, and take a long view of how the game has developed over the last quarter century. From Ferguson’s directness to Keegan’s relentlessly attacking Newcastle outfit, to Mourinho’s cagey, reactive Chelsea, all the way to Ranieri’s counter-attacking champions, The Mixer is one of the most entertaining, rich and knowledgeable football books ever written.

The Fall of the House of FIFA-David Conn

David Conn writes the definitive account of FIFA’s rise and fall, covering in great detail the corruption allegations and the series of scandals that continued to shake the public’s trust in the organization. The Fall of the House of FIFA situates FIFA’s unraveling amidst revealing human portraits of soccer legends such as Michel Platini and Franz Beckenbauer and features an exclusive interview with former president Sepp Blatter. Even as he chronicles the biggest sport scandal of all time, Conn infuses the book with a passionate love of the game, delivering an irresistible read.

Green Shoots examines why, almost a century after one Irish Association became two, this is still the case. It traces the overlapping stories and individuals in both associations, beginning with the tale of the boy on the front cover, Johnny Brown, a Belfast Protestant who played for Eire. Brown is the author’s great uncle.

This is only one strand of the broader story of Irish football. Green Shoots returns to the gures, often overlooked, who contributed so much to the growth of the game in Ireland and who made such an impact in England and Scotland too. Men such as William McCrum from Armagh, who invented the penalty-kick, and Billy McCracken from Belfast who changed the offside law in 1925 are brought back to life. A chronological thread leads from those men to Peter Doherty in the 1950s, George Best in the 1960s to Liam Brady in the 1980s and on to modern day players.

Blending original archival research, travel writing, and interviews with many of the game’s defining characters, Green Shoots looks at Irish football domestically and internationally. World Cups and European Championships are recalled and re-examined not just in sporting terms, but as defining moments in the country’s modern history.

Green Shoots is the engrossing account of the inside stories, dramas and dreams of the game in Ireland. Above all it is the definitive history of a footballing nation and its many paradoxes.

The Illustrated History of Football: Hall of Fame: 2- David Squires 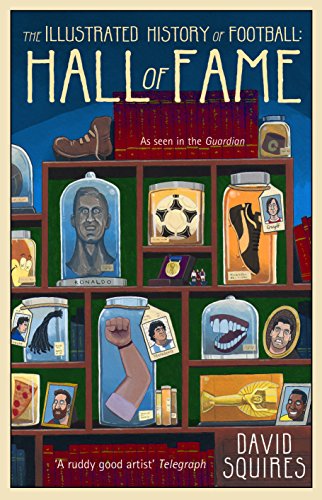 Most football fans can only dream of pulling on the shirt of their favourite team and running out in front of thousands of adoring fans. Pitch invaders aside, few of us get to experience that adrenalin rush. Of those who do make it as a professional footballer, even fewer realise the giddy heights of success.

In the Illustrated History of Football: Hall of Fame, cartoonist David Squires returns to celebrate those who straddle the game like giants; those talented, determined souls who were juggling tennis balls in the back streets before they could talk.

There’s more than one way to attain football immortality though, and Squires also turns his comic eye to the mavericks, the pioneers, the forgotten legends and the anti-heroes. From Pele to Meazza, Maradona to Socrates, you will be taken on an unforgettable journey through the good, the bad and the Hagi.

Five-a-Side football is where you play the beautiful game for love, not money. You play it for life and you play it everywhere. Your kit is damp and your legs are a leopard’s back of bruises. Shirts are often tight around the belly, with your hero’s name plastered across your shoulder blades. The showers are too cold in winter and too hot in summer.

Your used sports bag stays unpacked in the hall, and your water bottles are under the kitchen sink. The post-match warm down takes place in the pub. As does the match analysis. By contrast the warm up is non-existent. Your performance is patchy and maybe not what it used to be. But we all still think we played great. Five-a-Side is sporting Karaoke – a time and place to live out our dreams.

This is a book for all of us – school mates, work colleagues, total strangers – bonded by the desire to blast one into the net from two feet away.

In Outside the Box, Duncan Alexander looks back at twenty-five years of the Premier League and beyond, uncovering the hidden truths and accepted myths that surround the game. Using the archives of OptaJoe and never-before-seen data, we discover why Liverpool have gone 27 years without winning a league title and why Lionel Messi is the best player in the game’s history. Or is he?