Make no mistake, even though Manchester City drew their homeChampions League match with Roma 1-1 in reality Manchester City lost this match. With multiple Roma starters missing and an early 1-0 lead Manchester City was not able to finish this match with a desperately needed three Champions League Group points. The crucial decision made by Manchester City’s manager, Manuel Pelligrini, was to set up Manchester City in a 4-4-2 formation, with only two central midfielders. Roma played a 4-3-3 formation with three Central Midfielders and Francesco Totti as a “False 9” Center Forward. Totti played this position 21 times in the 24 matches he started in the 2013/2014 season and has played the same position every time he has started in the 2014/2015 season. A “False 9” is a Center Forward who drops deep into midfield in between their opposition’s defensive and midfield lines to offer an extra central passing option: 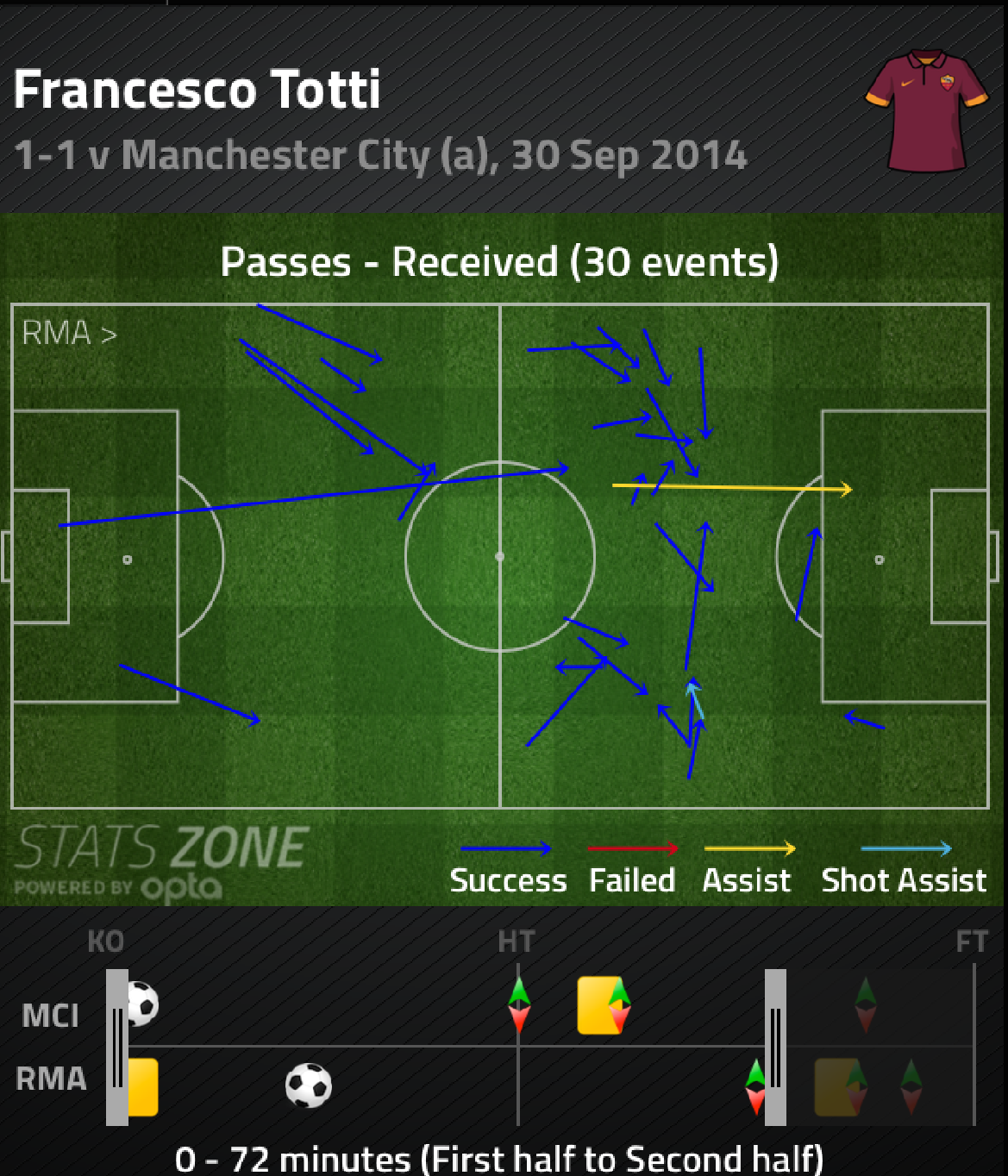 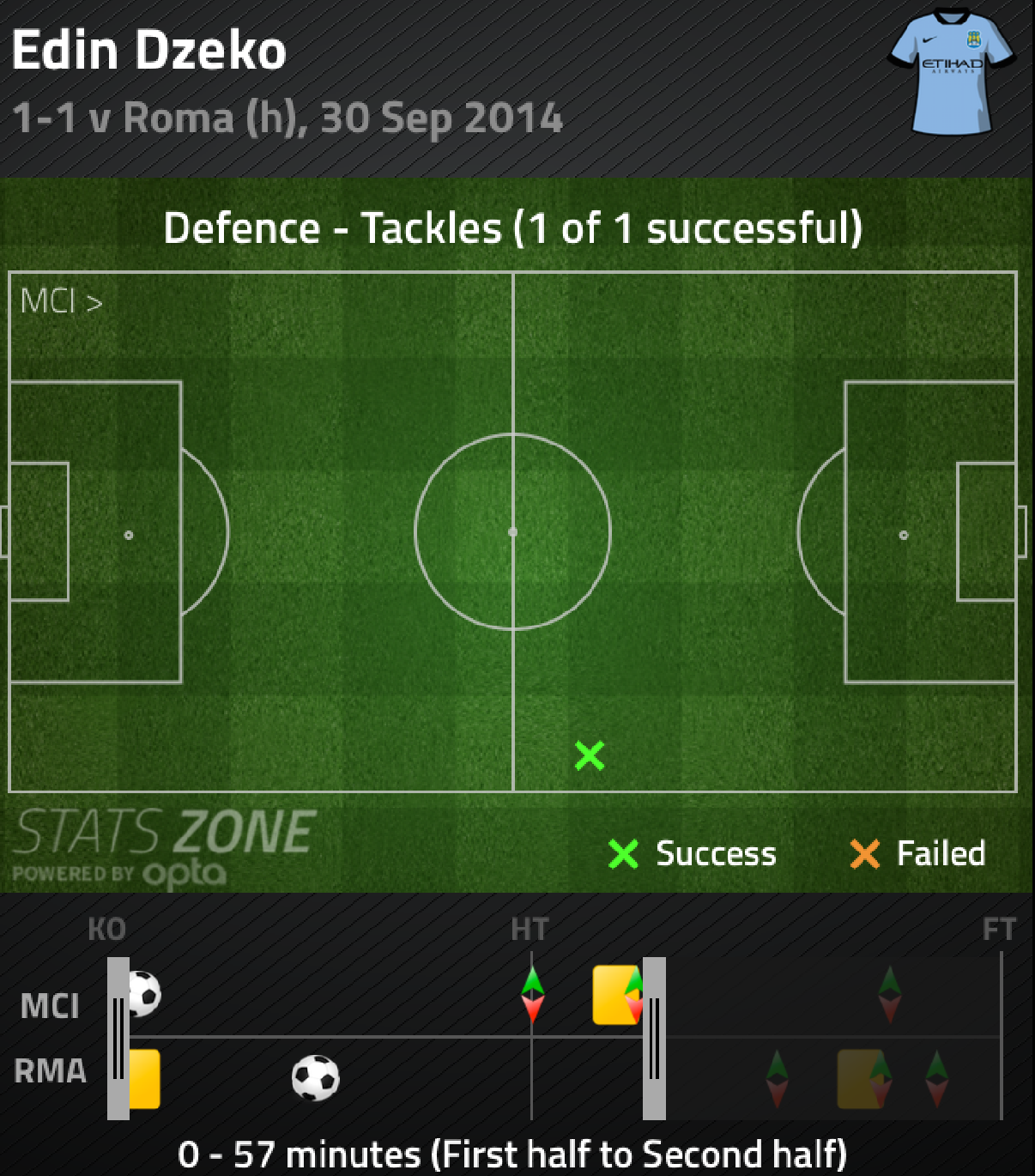 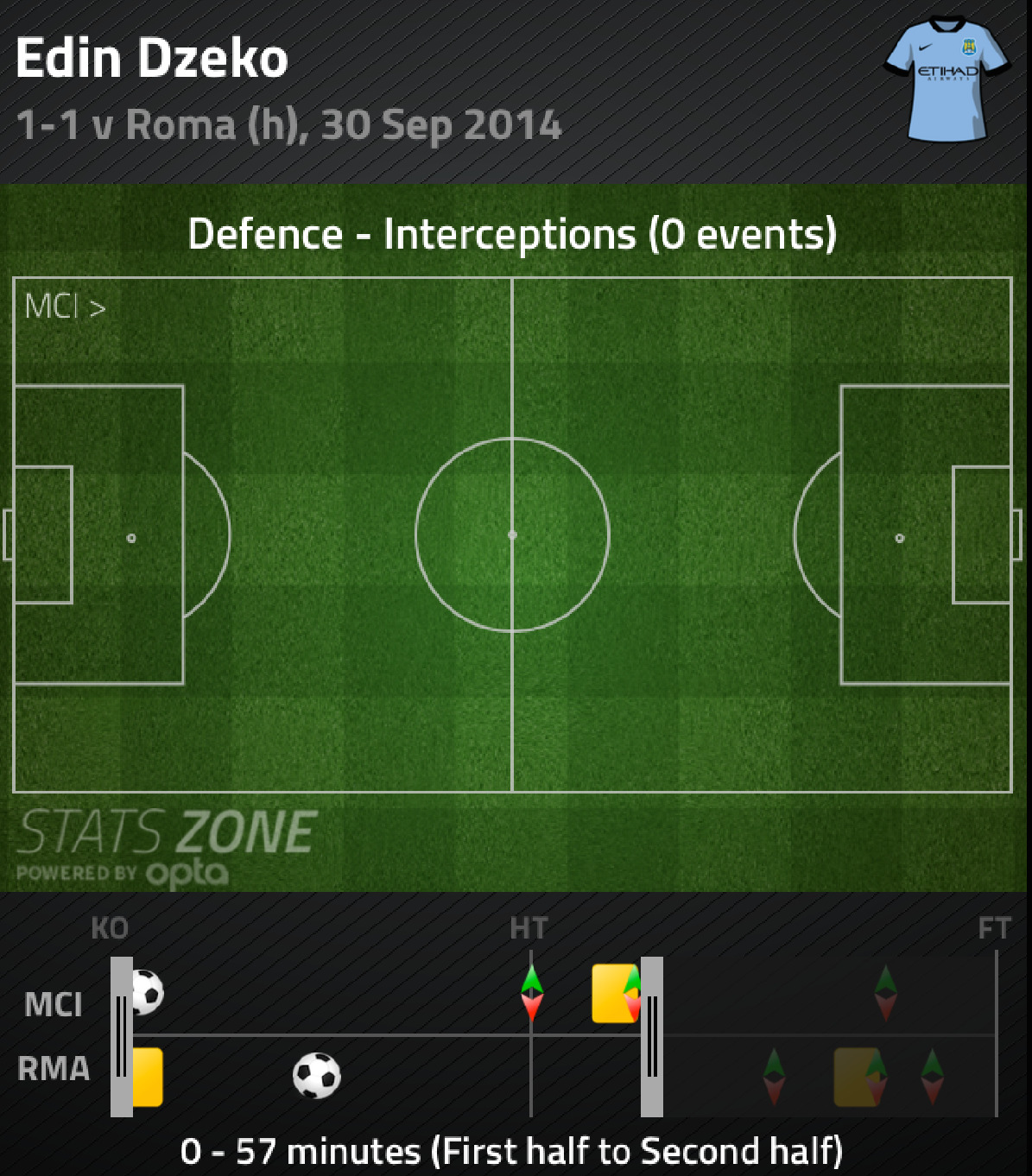 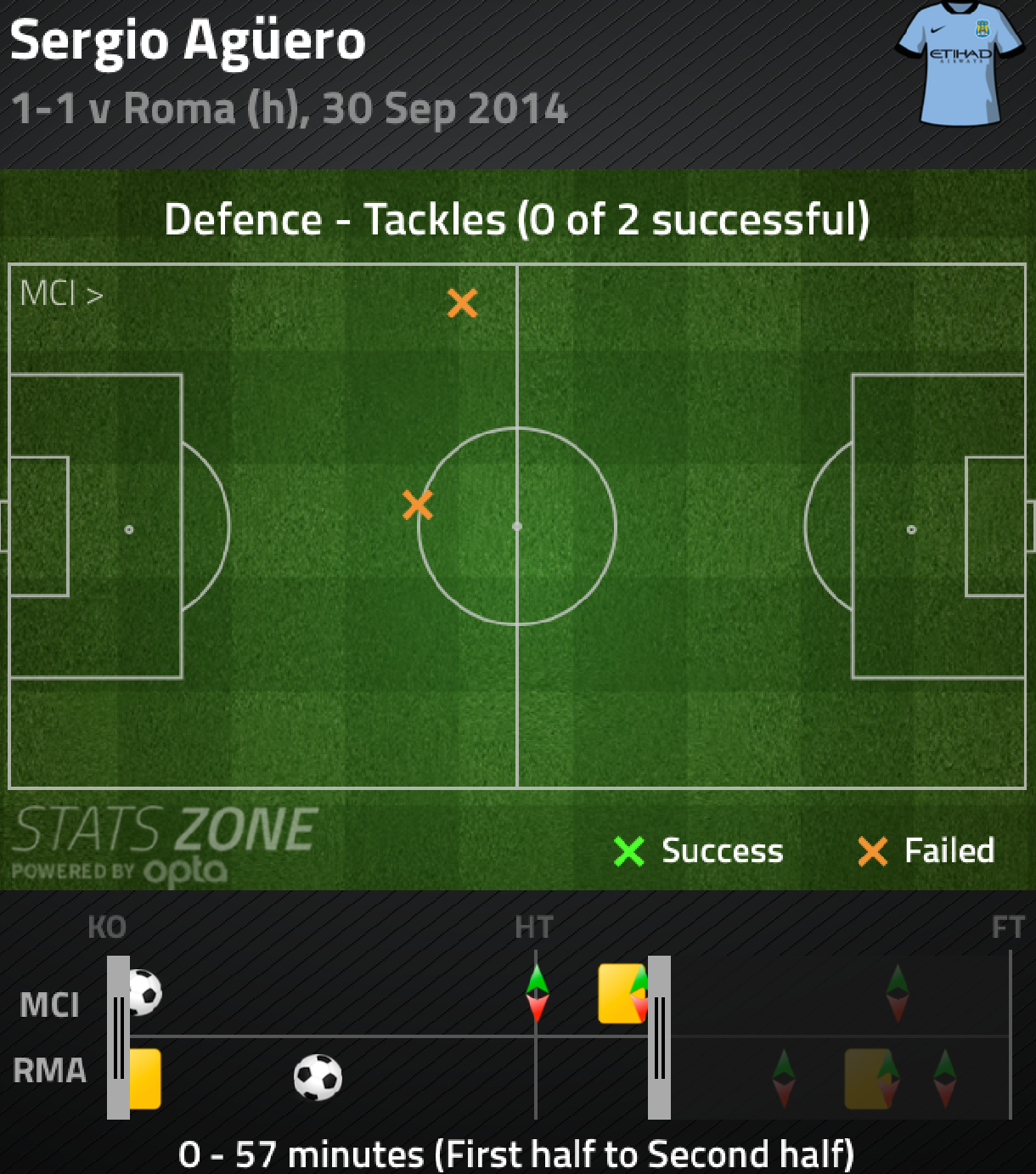 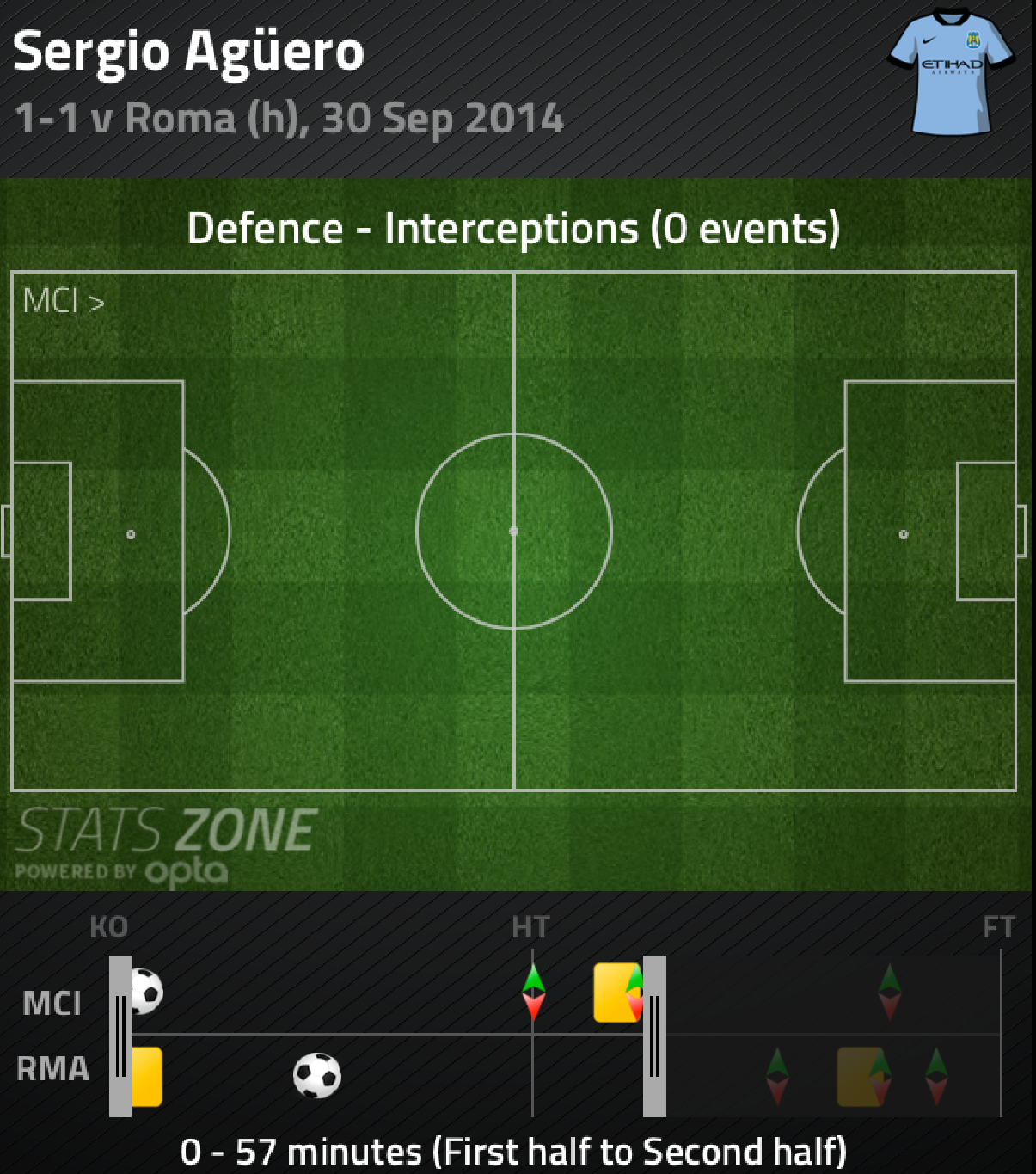 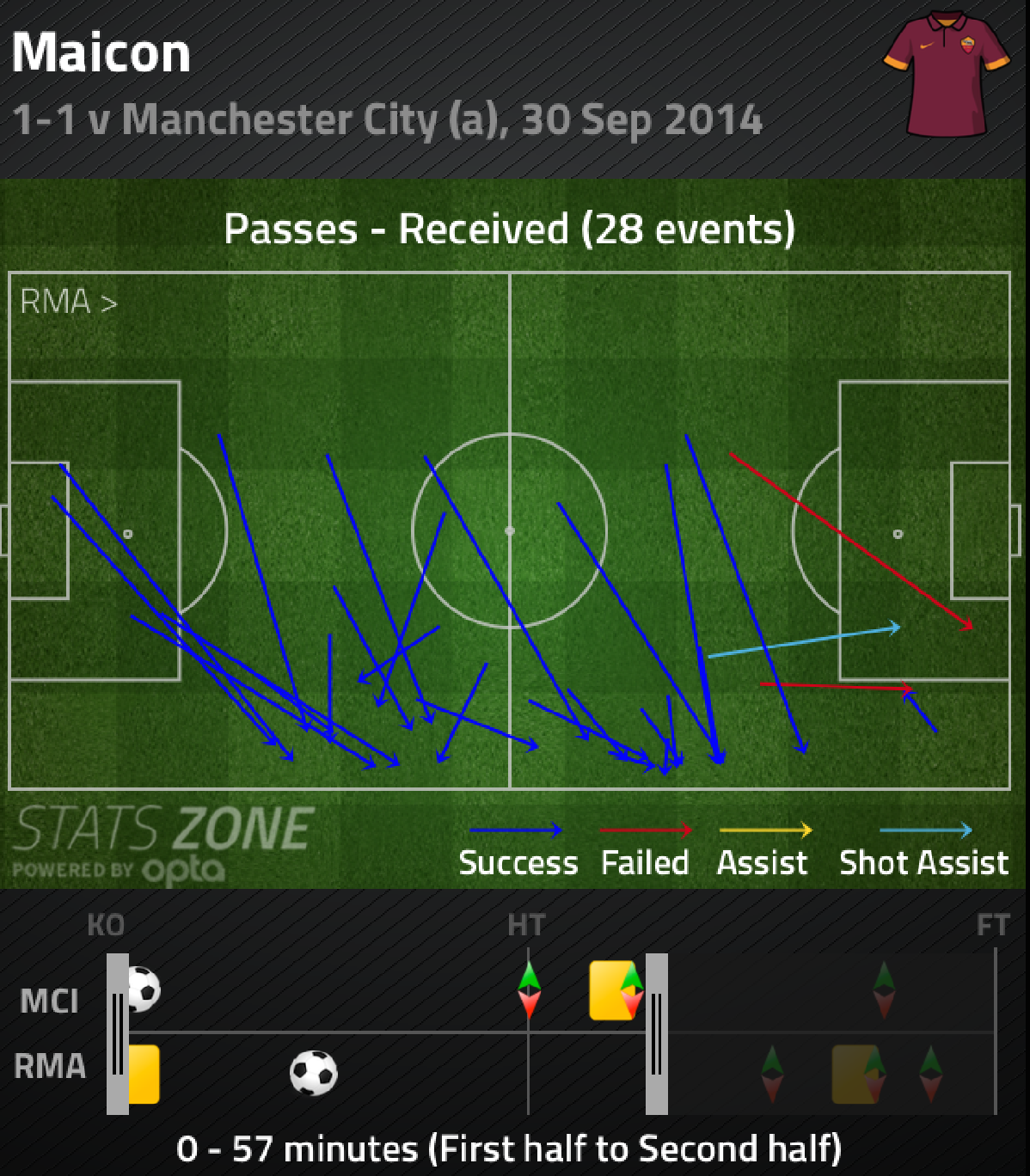 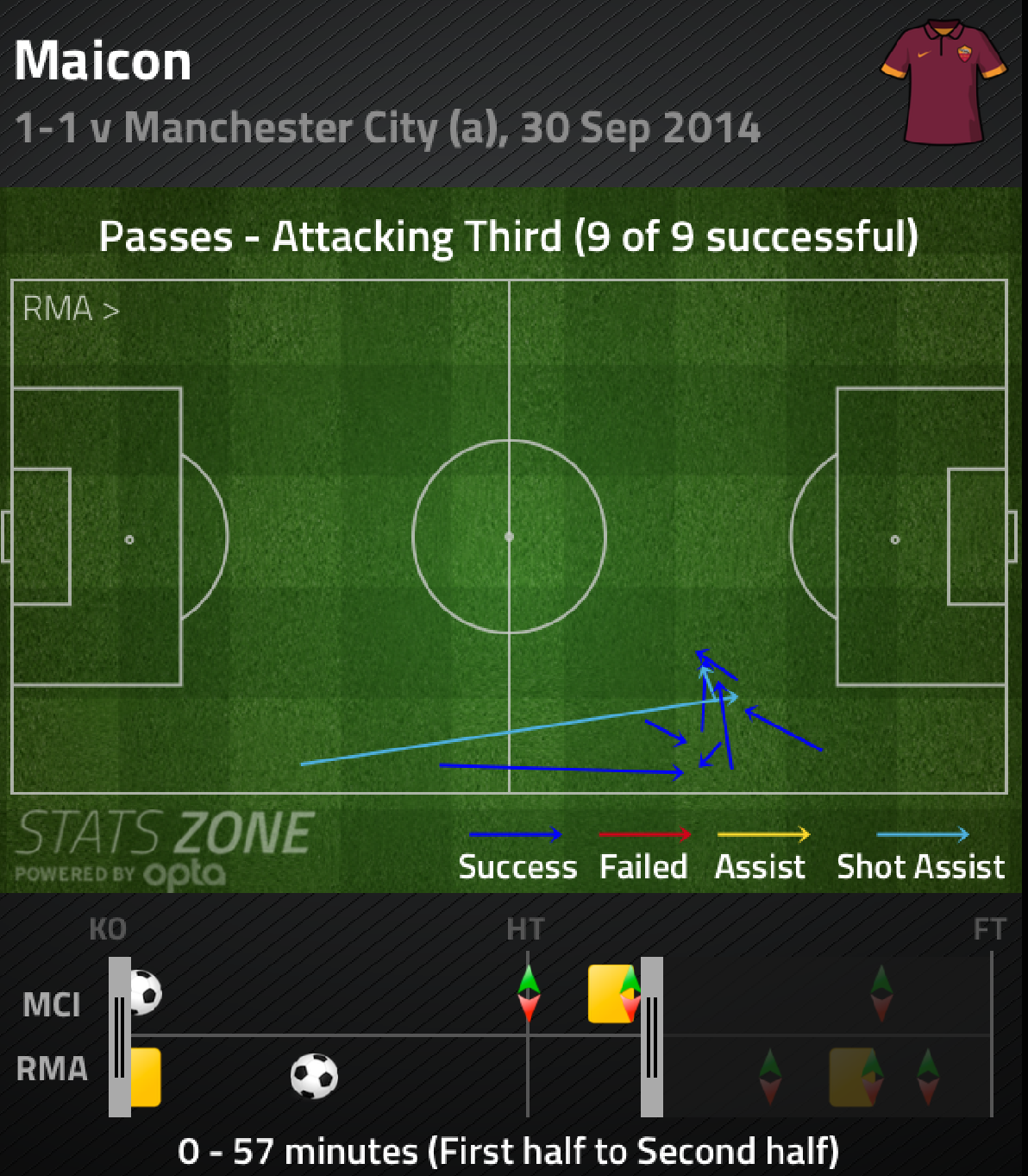 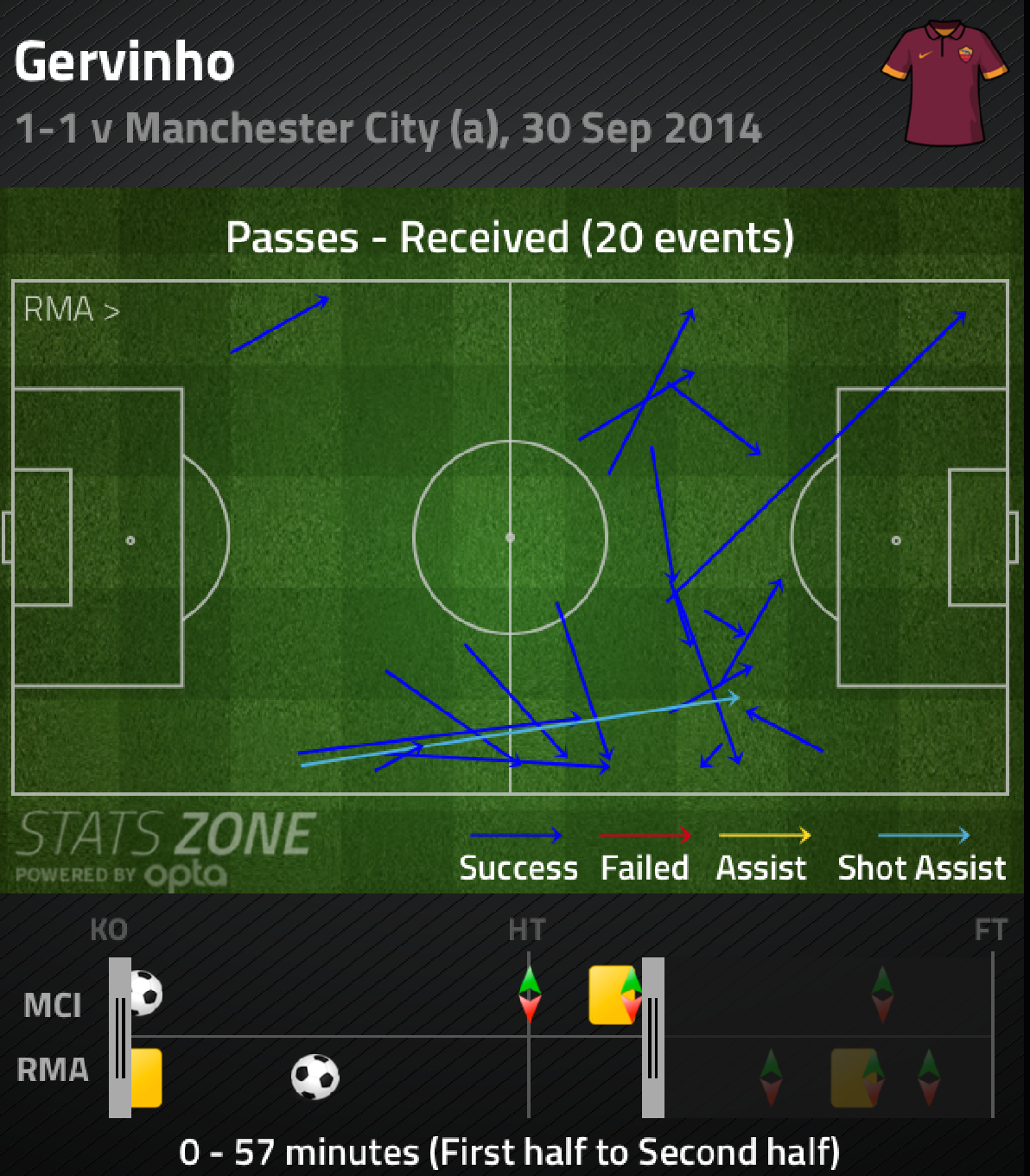 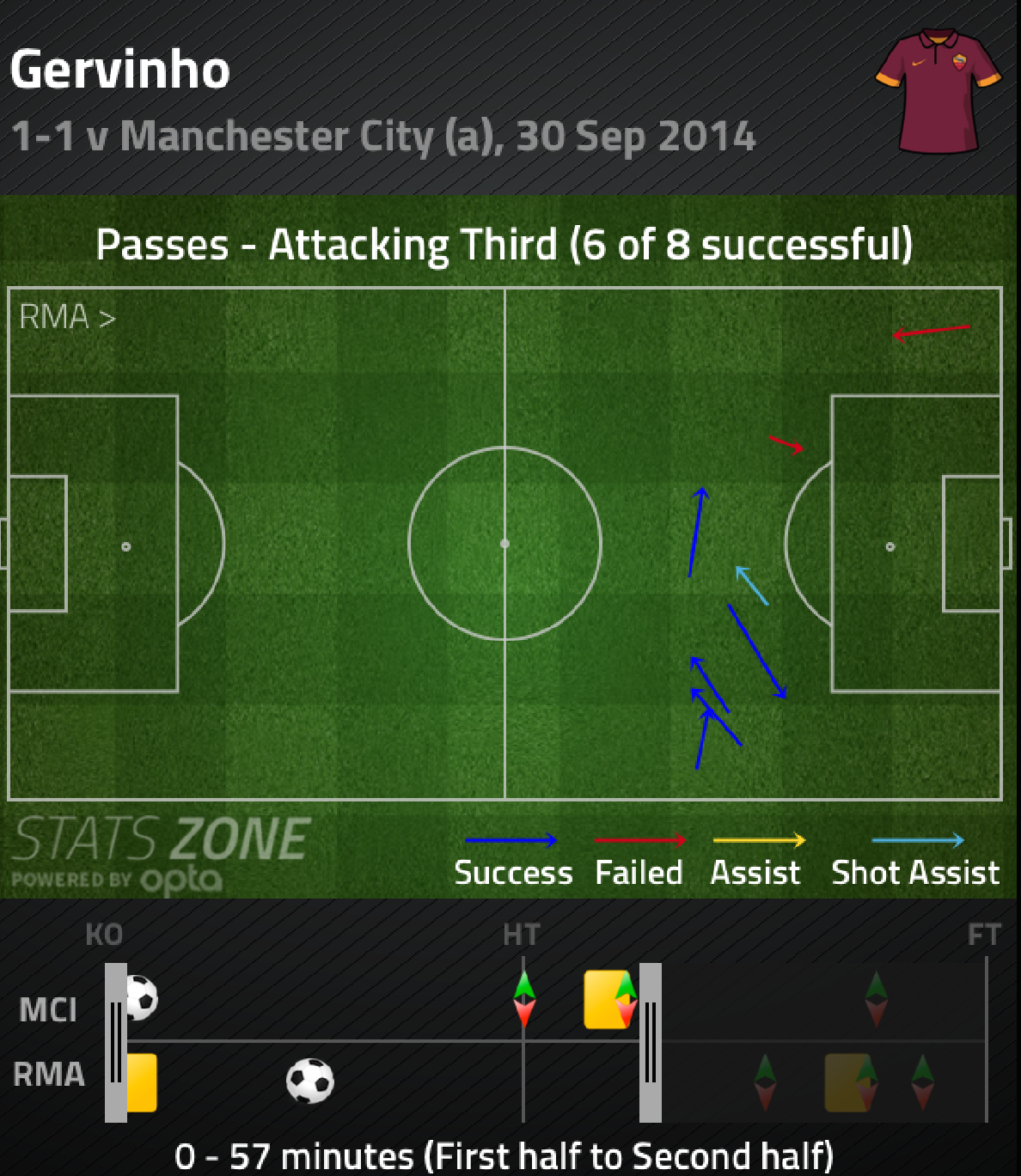 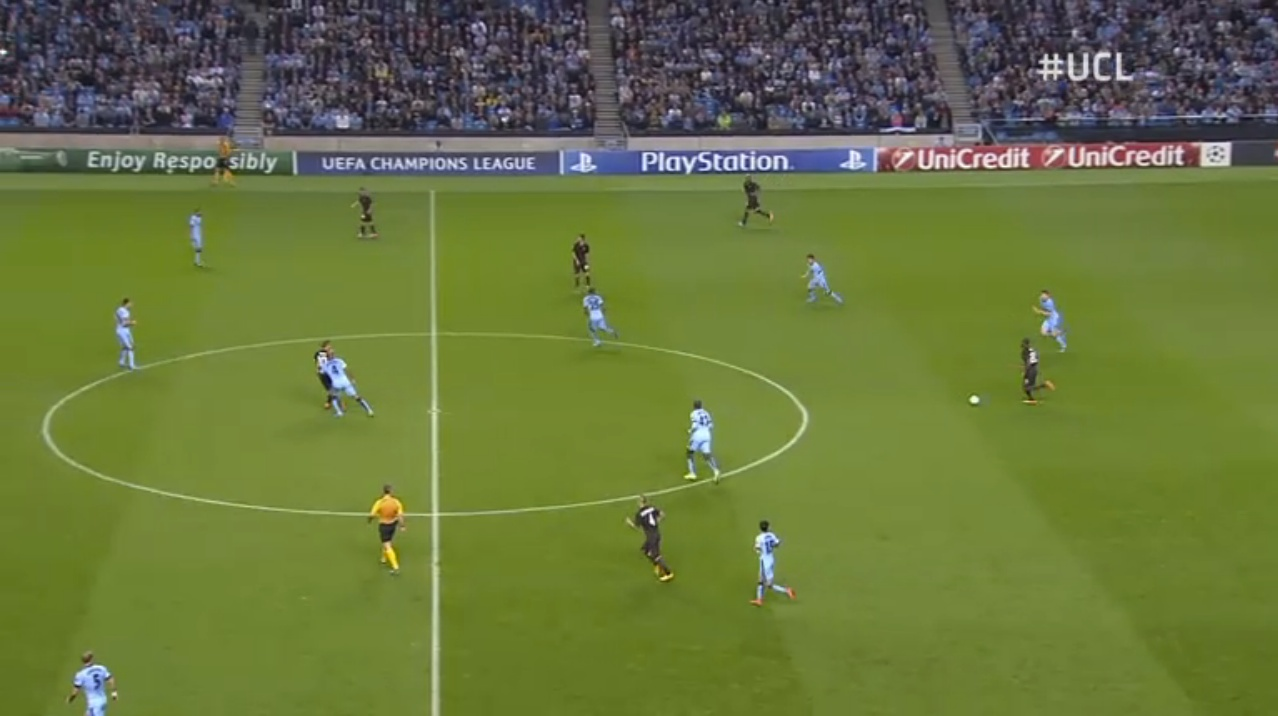 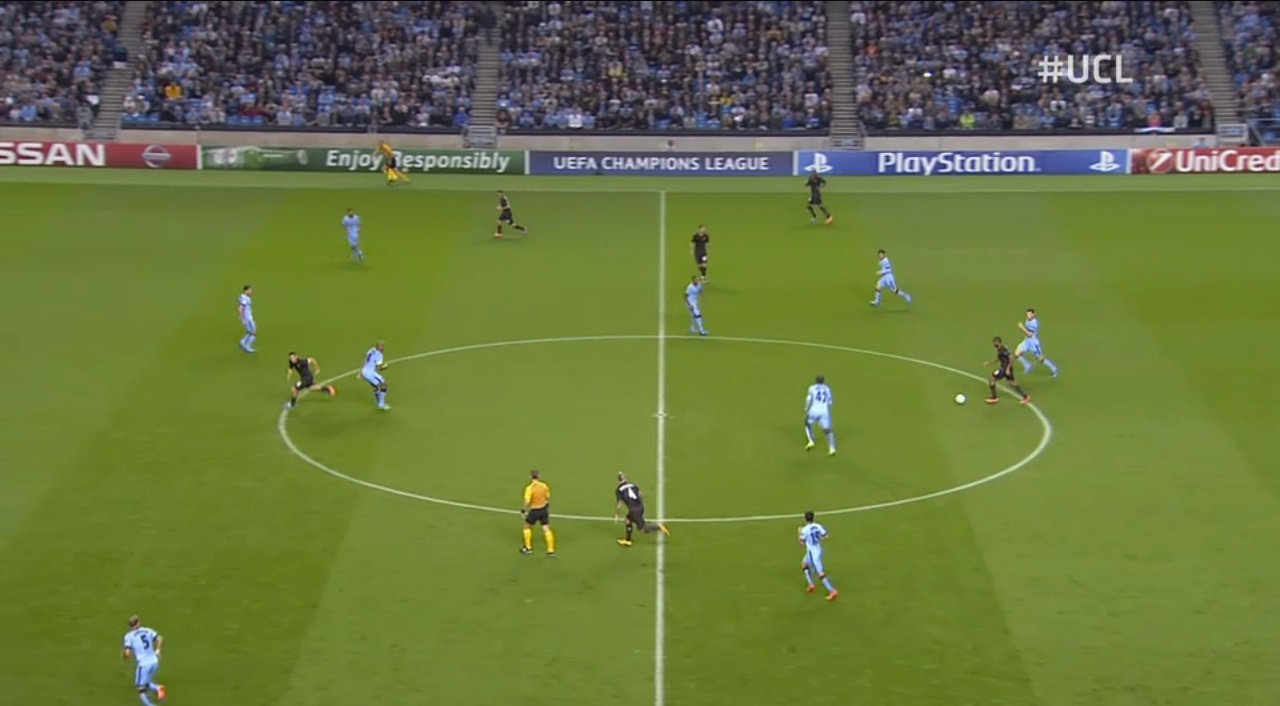 Roma continued their control of the match for the rest of the 1st half.  At the beginning of the 2nd half Manchester City substituted James Milner for Jesus Navas. Milner played on the Left Wing and David Silva switched from the Right Wing to the Left Wing position. However, this substitution did not change the flow of the match because Pelligrini did not fix Manchester City’s central midfield and they were still overrun centrally by Roma. The flow did not change until the 57’, after two more scoring opportunities; one in the 52’ that should of given Roma the lead, and a free shot on goal for Pjanic from the top of Manchester City’s penalty box.

In the 57’ Frank Lampard replaced Edin Džeko. Lampard moved into the Central Attacking Midfielder position and Manchester City changed formation from a 4-4-2 formation to a 4-2-3-1 formation, and more importantly a three man central midfield.  Automatically, Manchester City took control of the match: 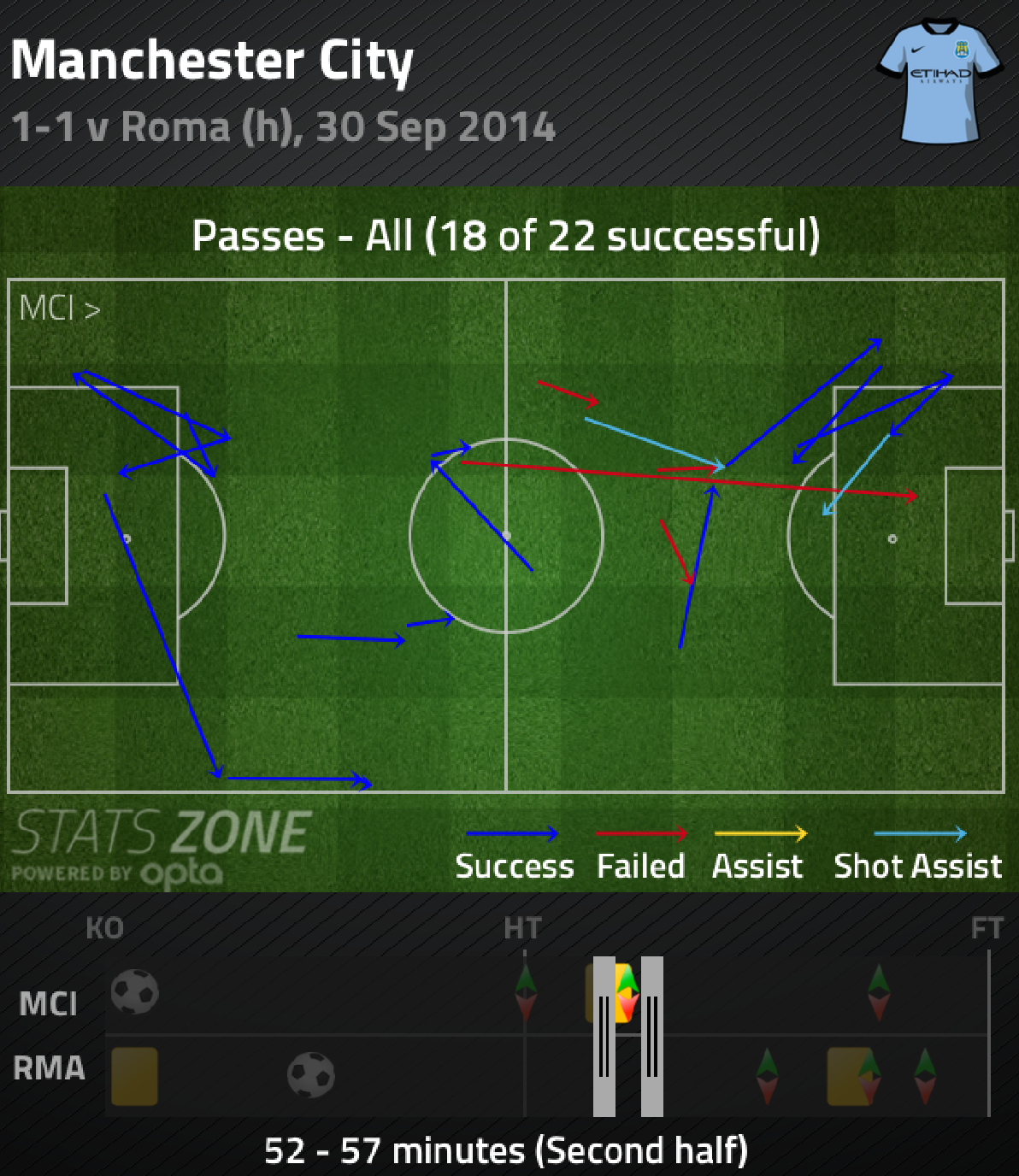 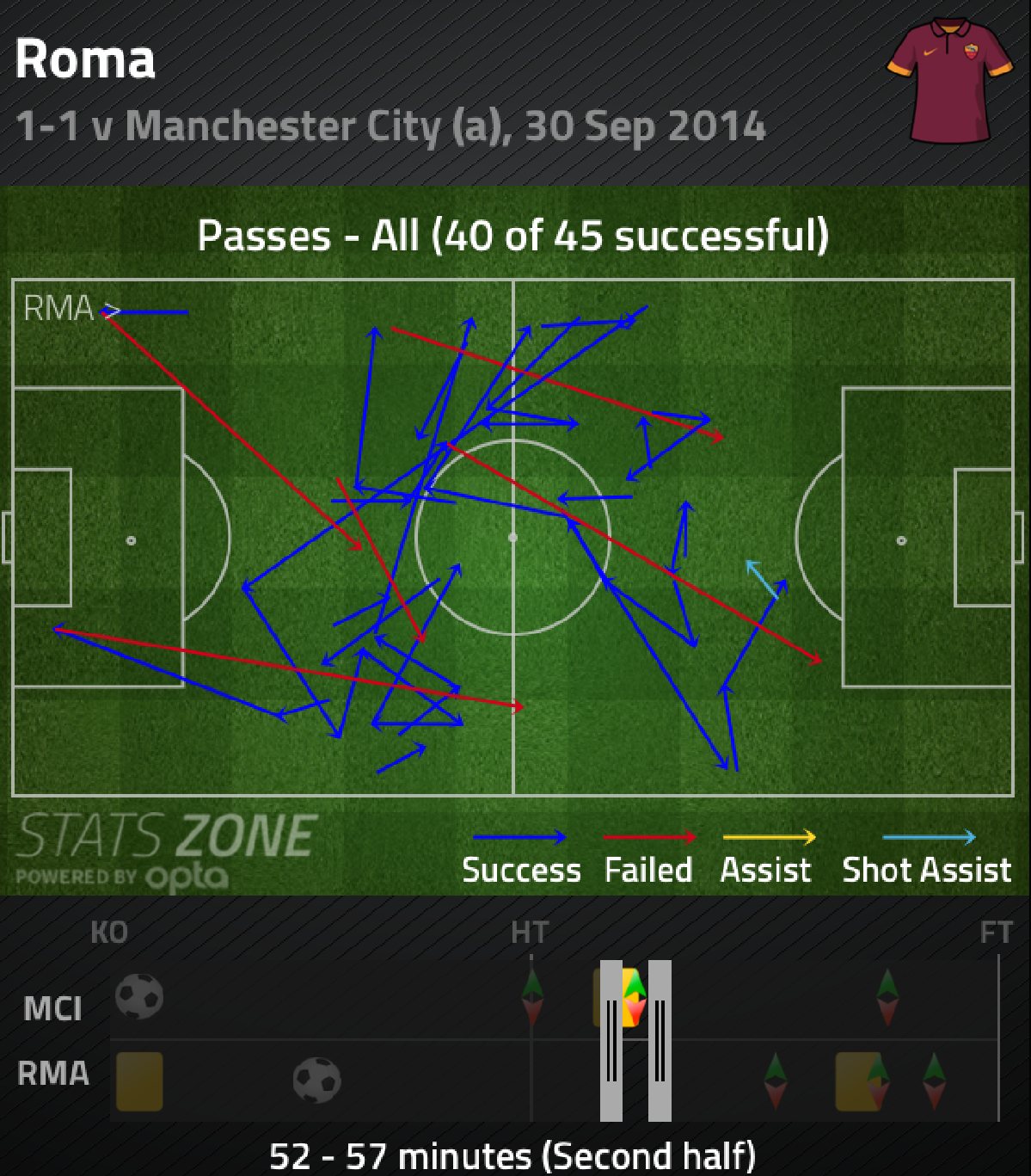 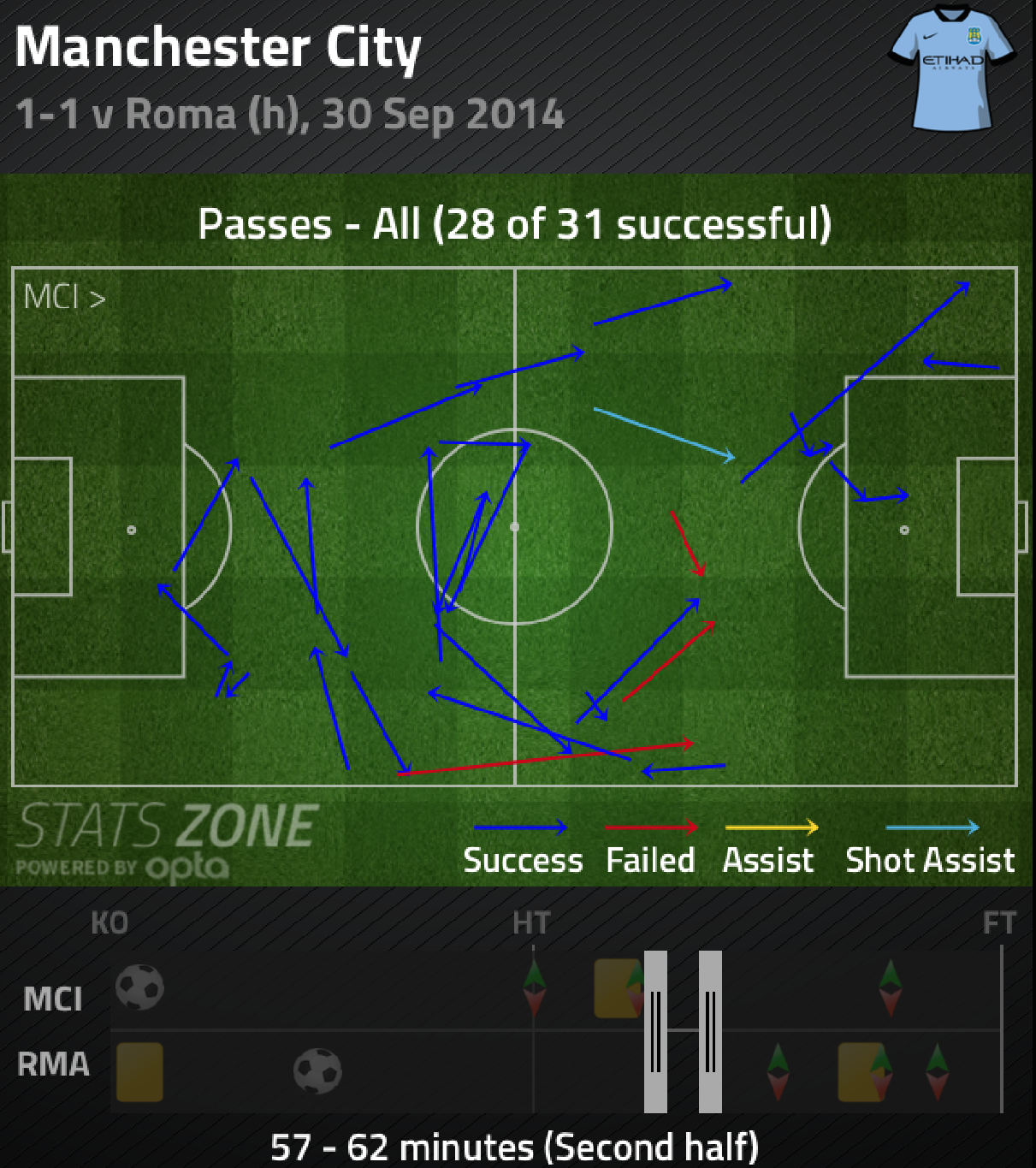 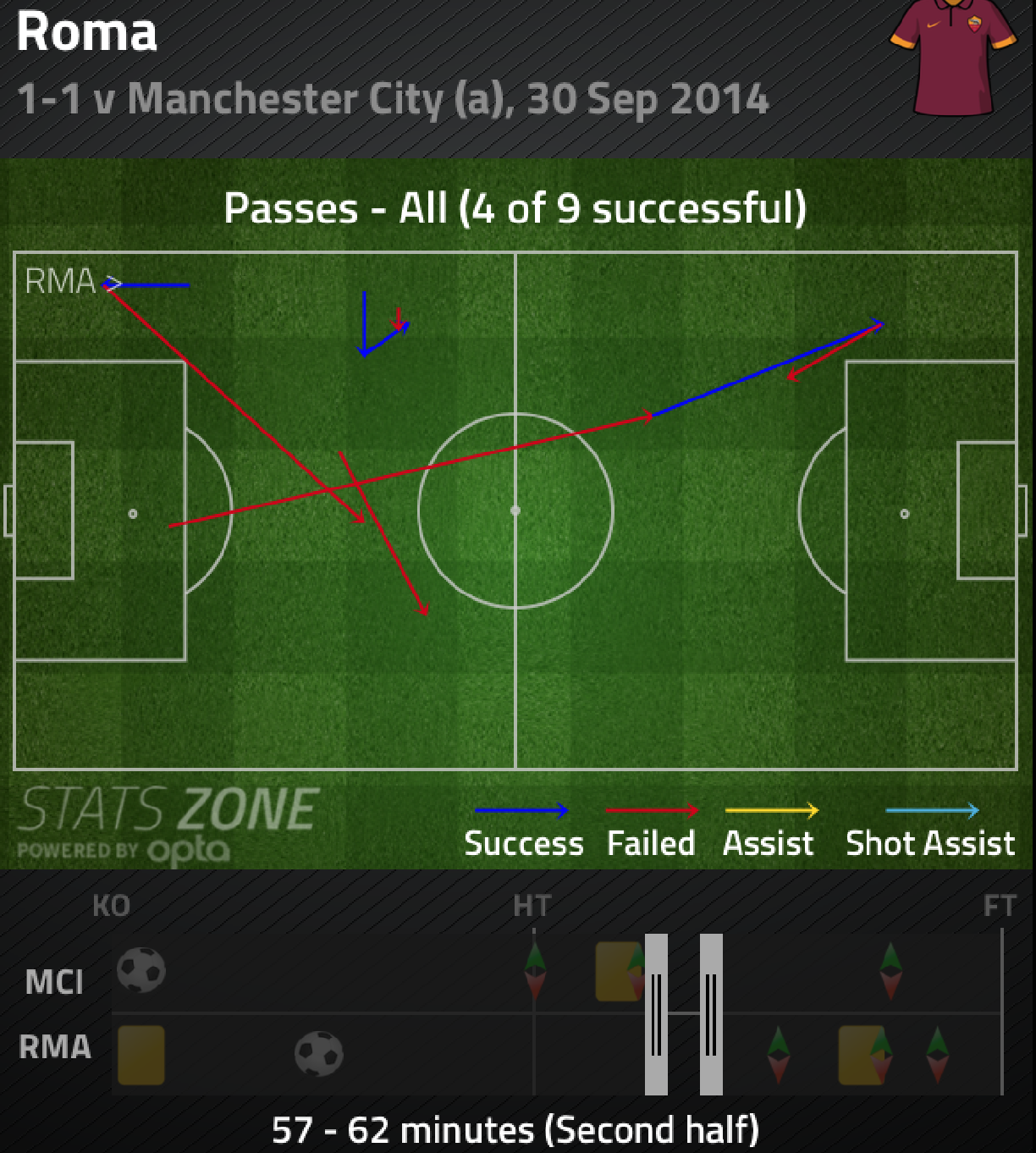 With the extra central midfield support Manchester City was able to compete for the ball and close down Roma’s players who were in possession of the ball, making it easier for Manchester City to steal the ball from Roma: 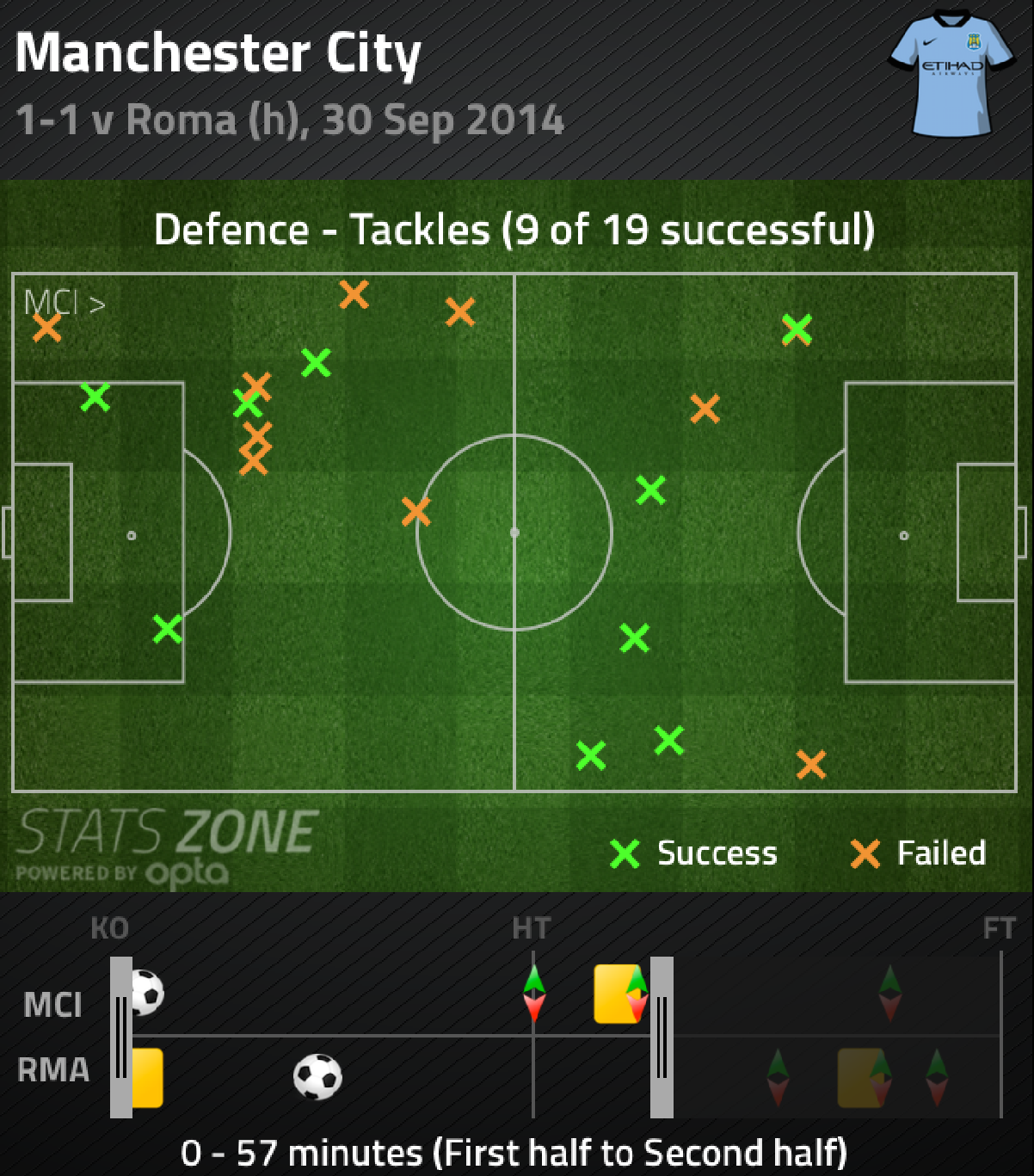 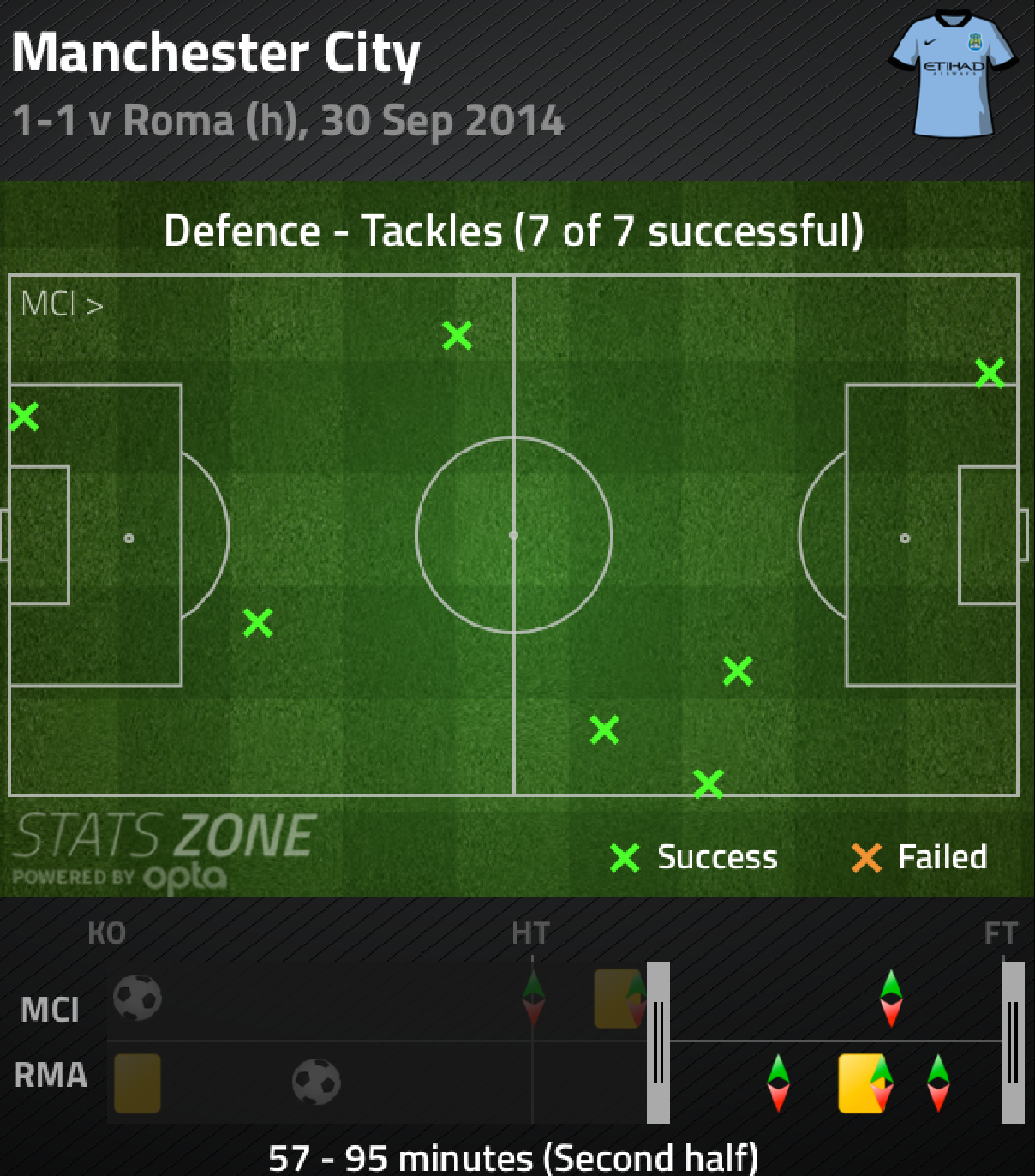 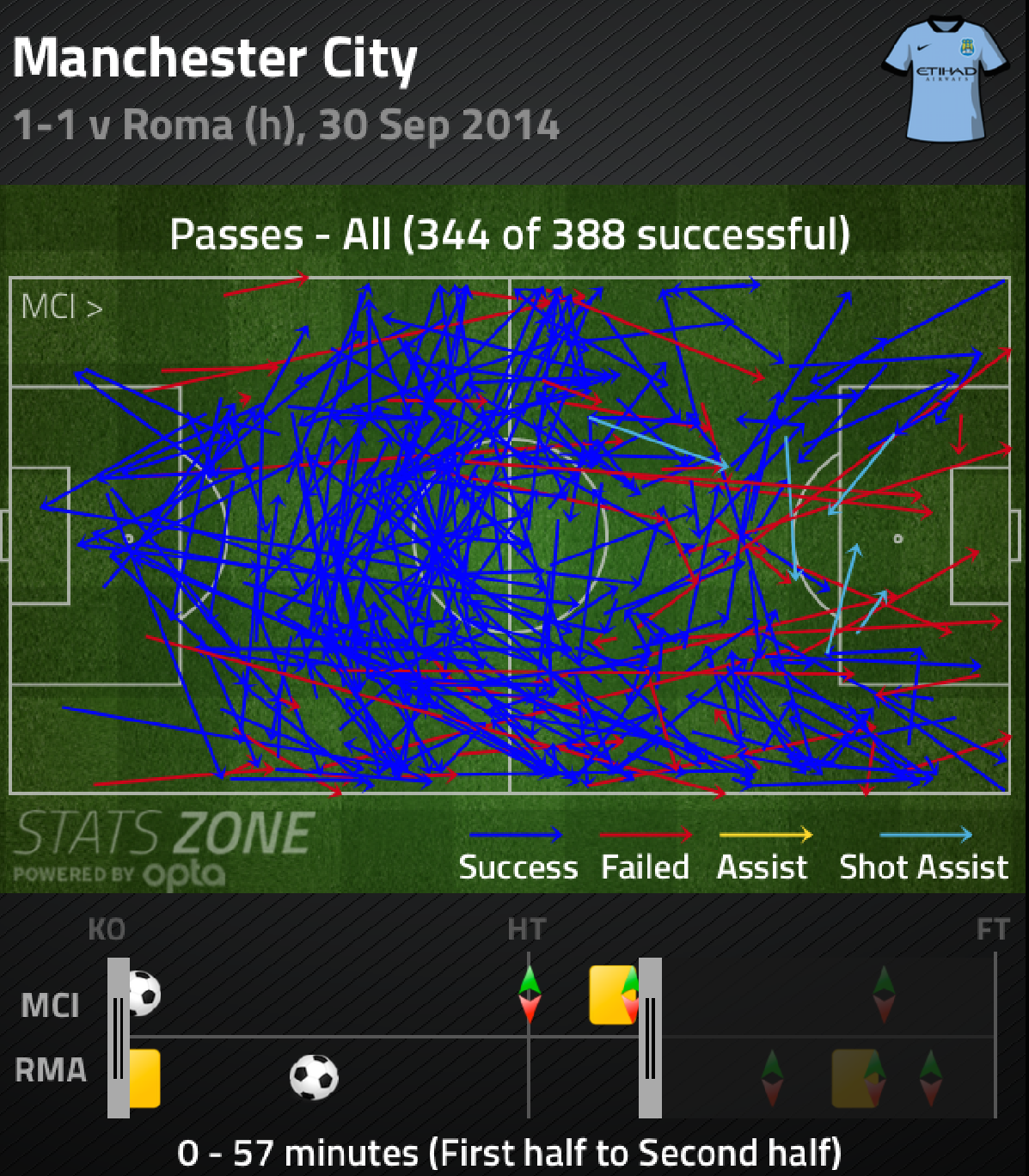 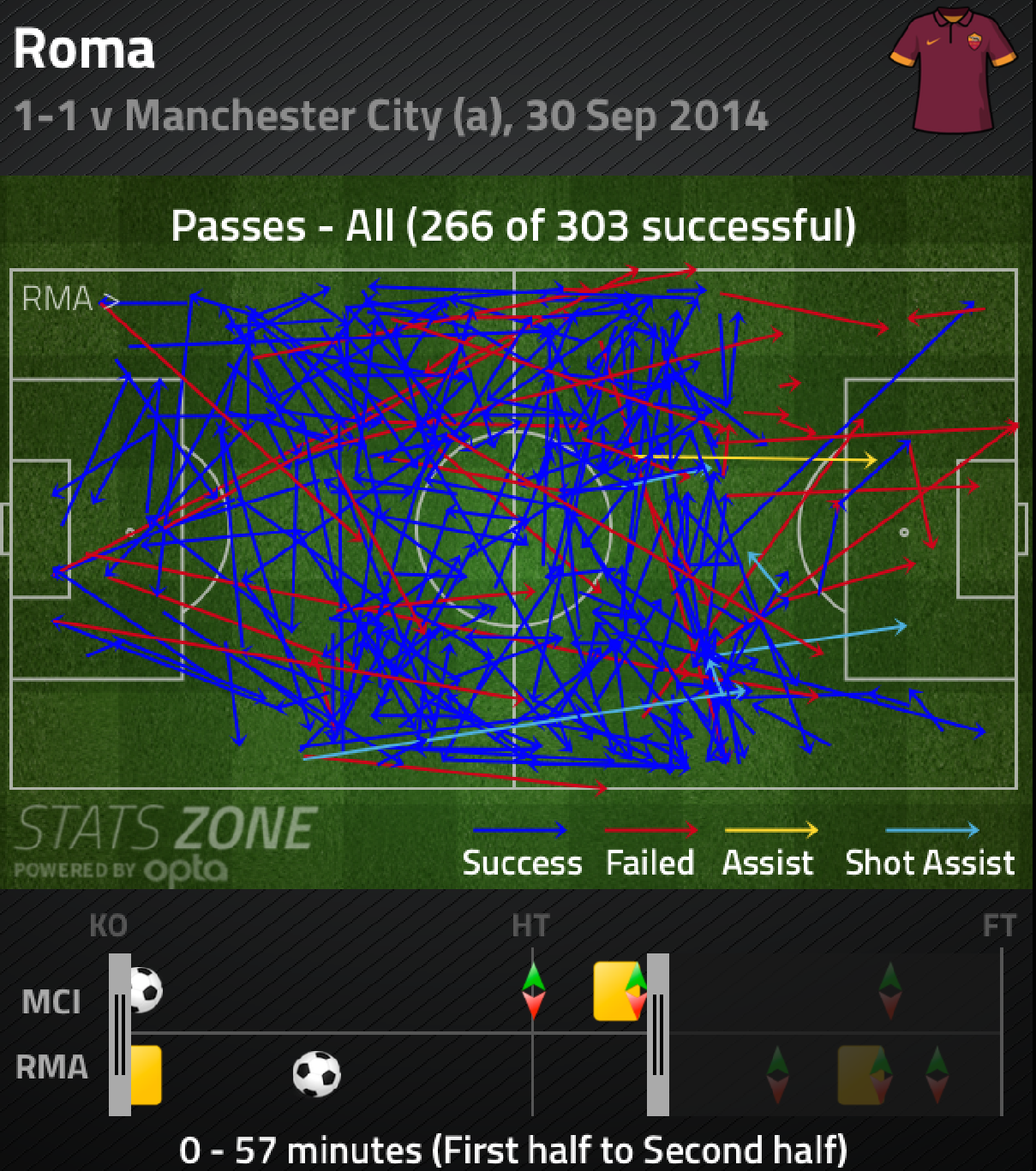 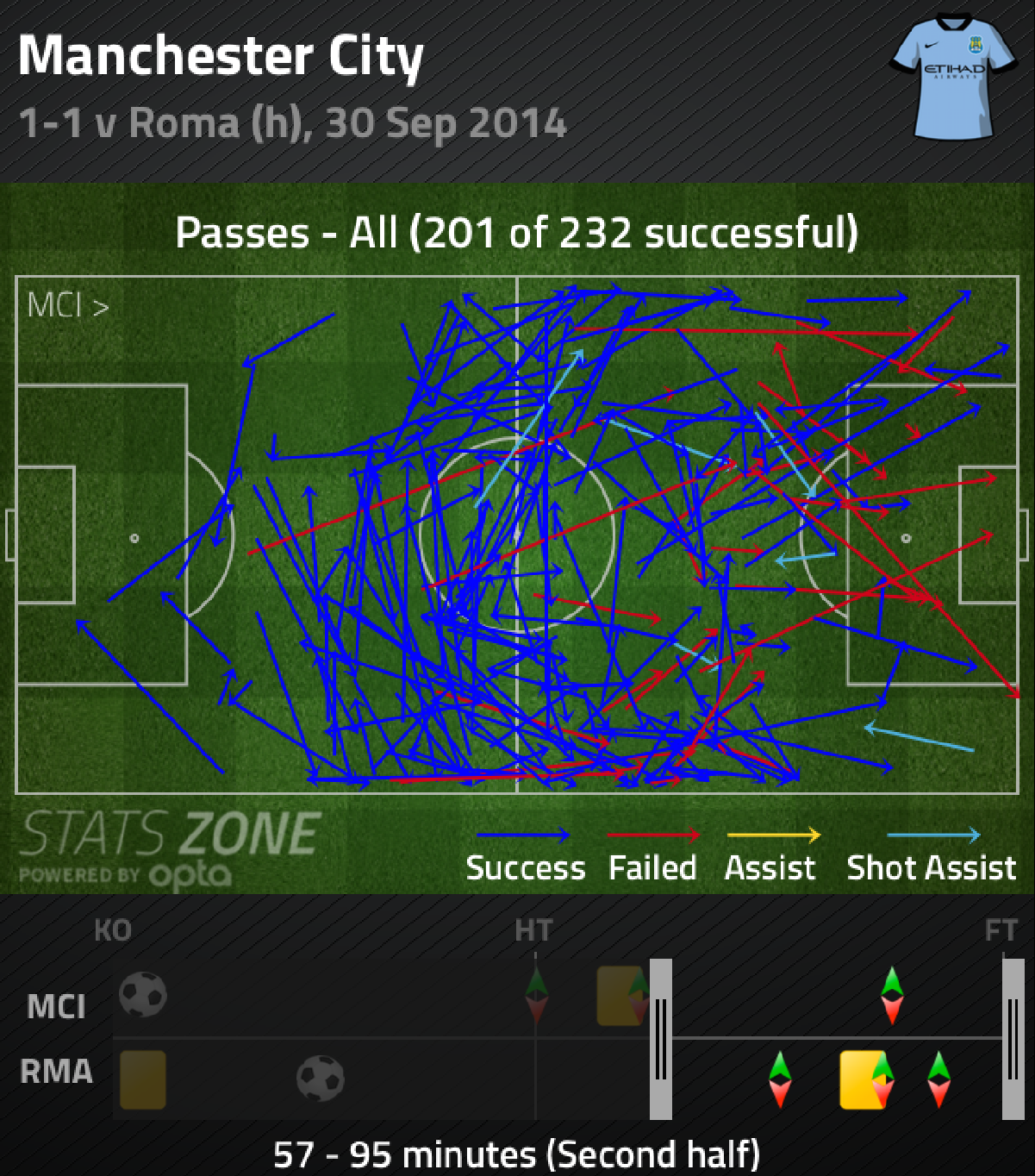 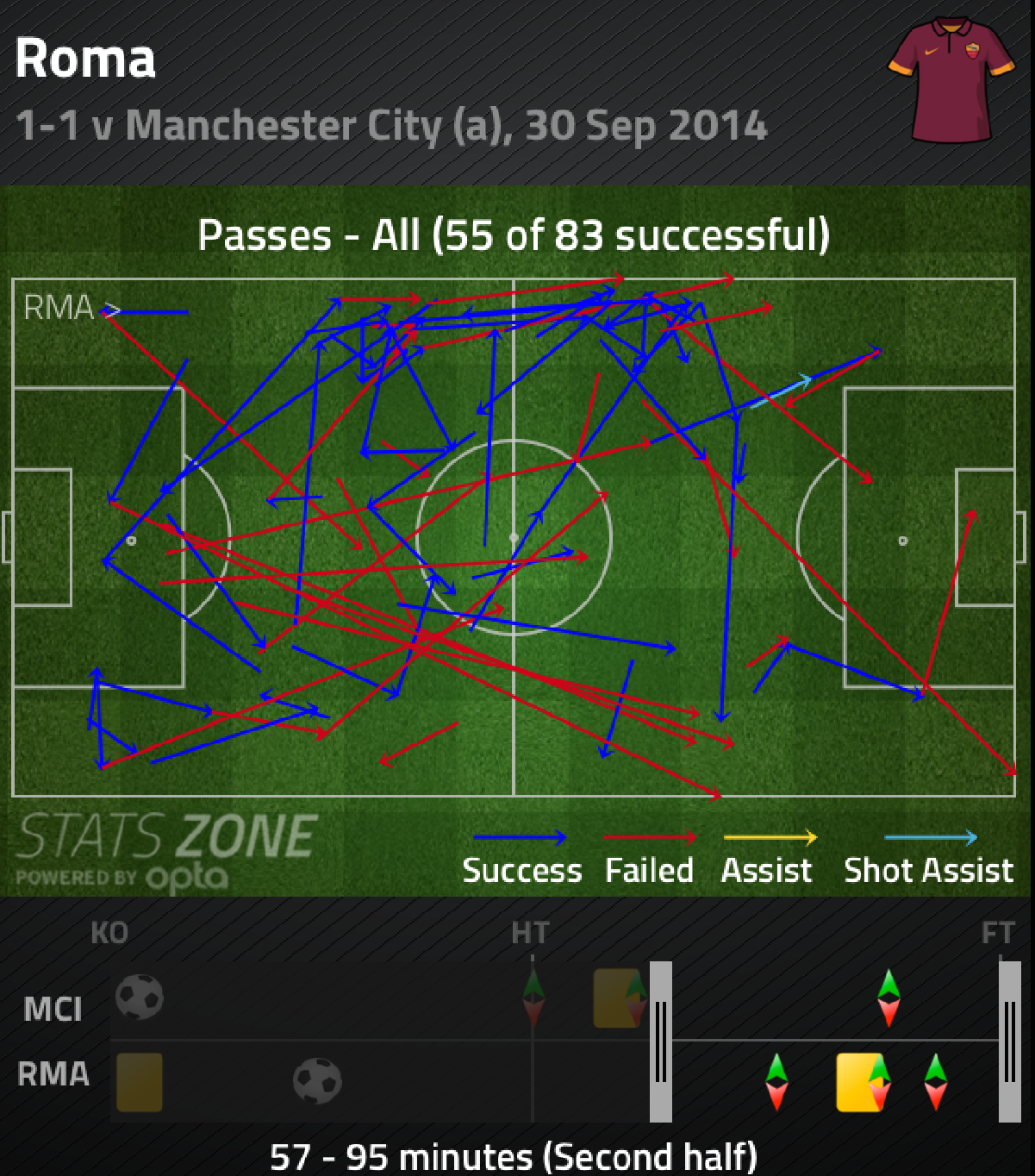 With Manchester City now taking complete control of the match, Roma was trapped in their defensive third and forced to desperately defend in an attempt to keep Manchester City from scoring a 2nd goal and winning the match: 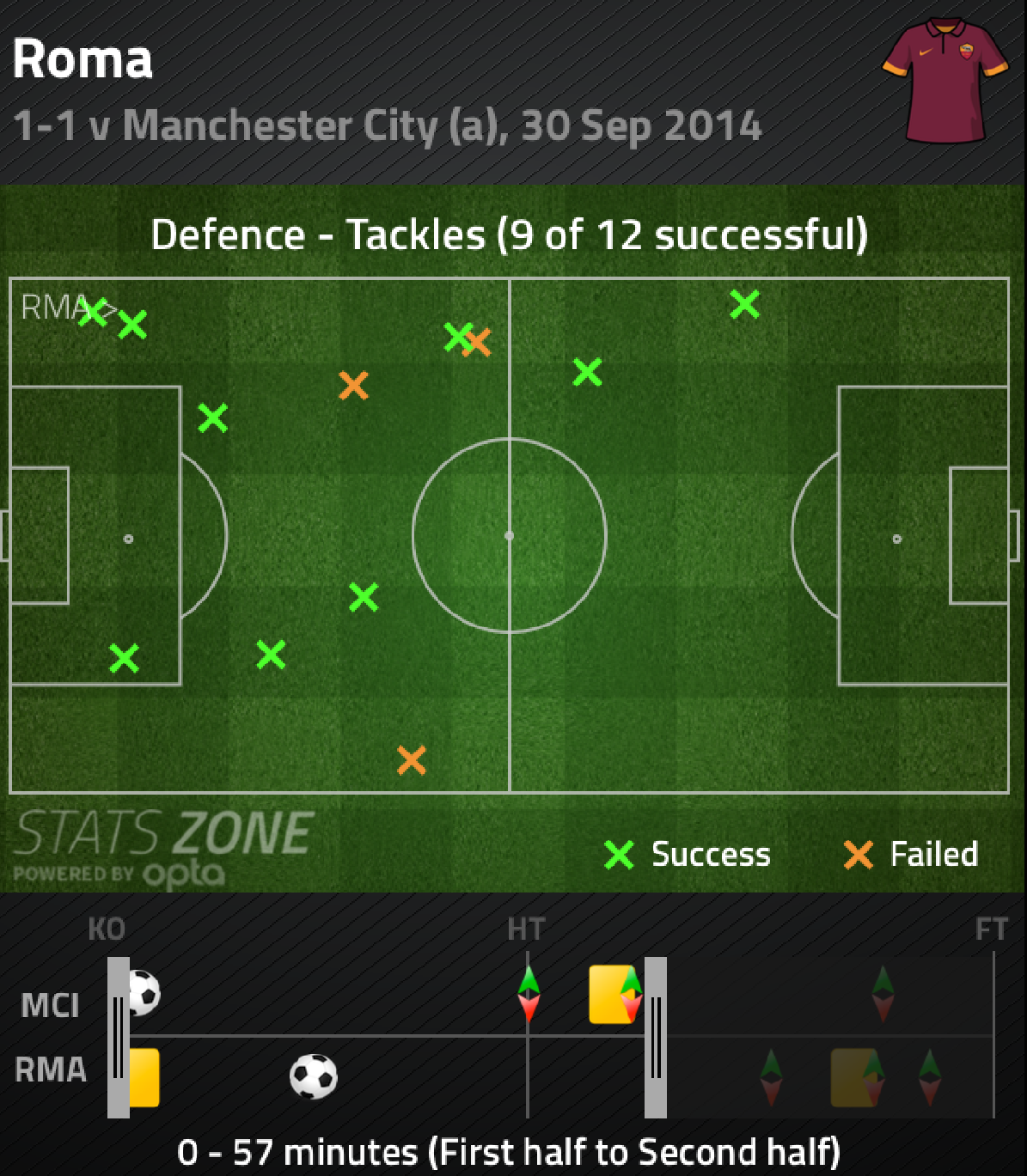 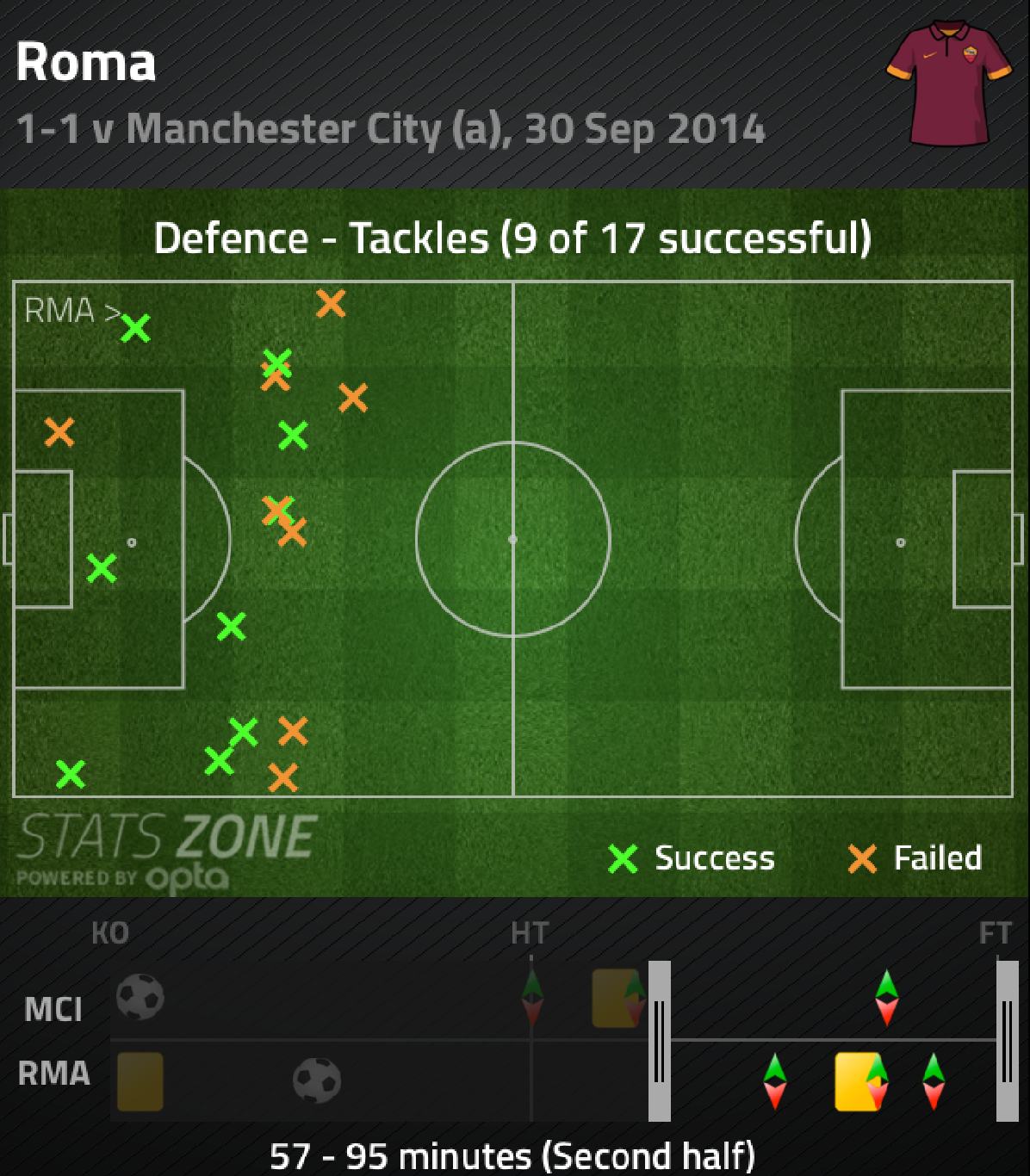 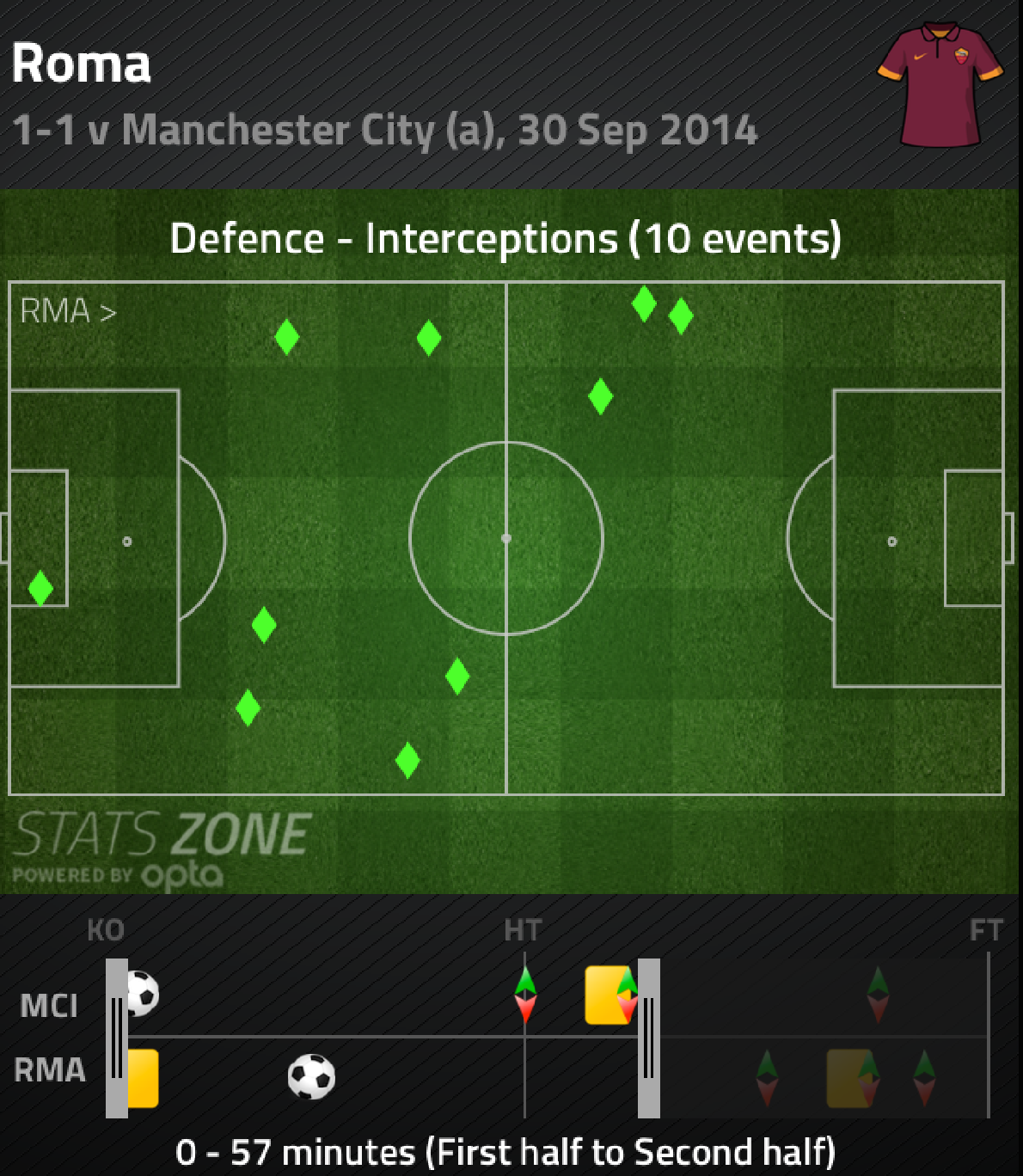 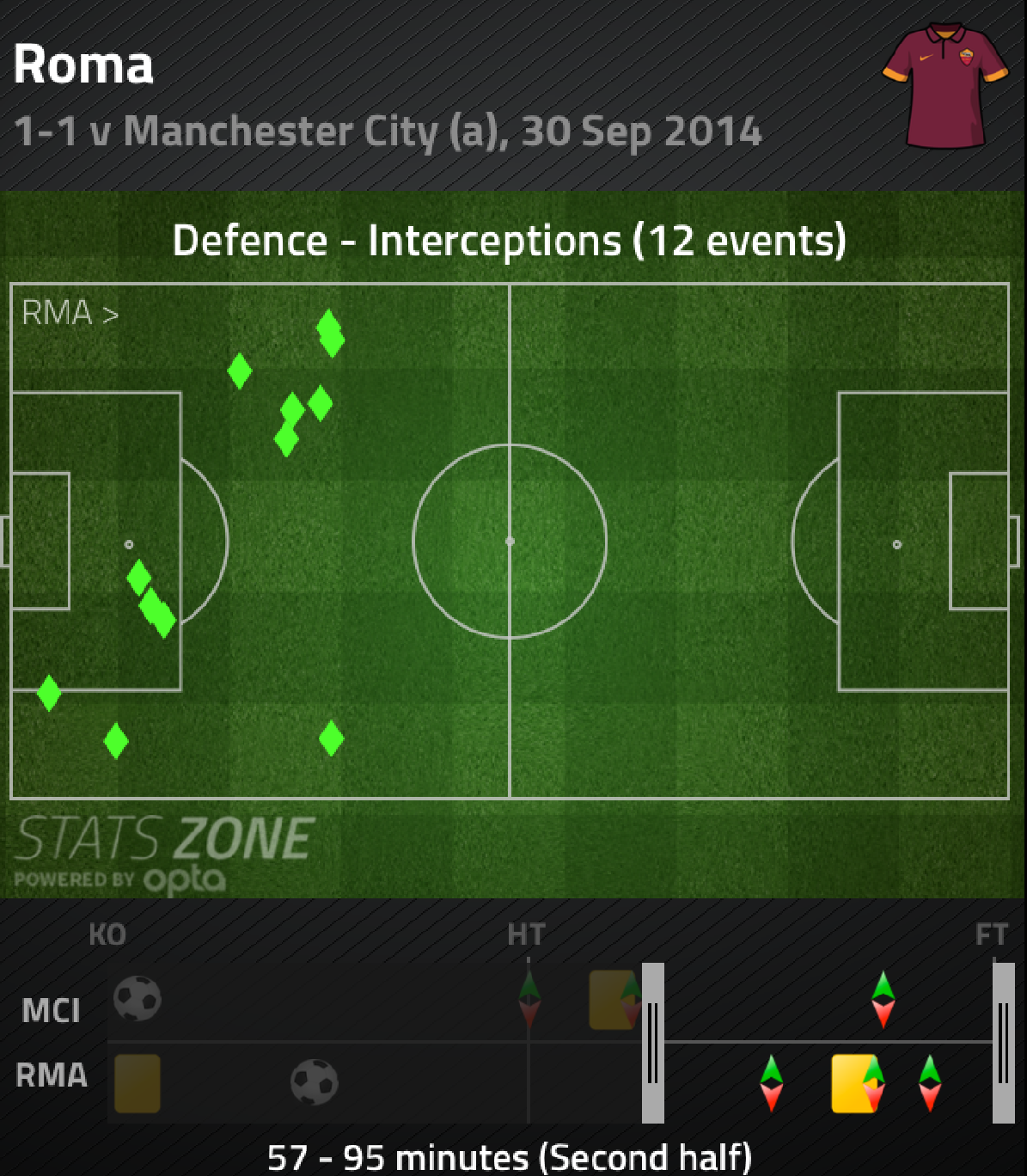 The extreme shift in balance of play after the addition of Lampard in the 57’ minute begs the question of why Pelligrini did not start the match with a three man central midfield? The responsibility for this loss has to fall at the feet of Pelligrini.  He failed to adjust his pregame tactics to deny Roma the opportunity to play their preferred style of play. Pelligrini was hired to make sure matches like this never happen.  Like last season’s Manchester City 1-3 loss to Bayern Munich at home in the Champions League group stage, Pelligrini has failed again.