It’s been another eventful year in the world of football. As we look forward to 2019, we have compiled a list of the best football books of 2018. The list includes books on football history, tactics, politics and much much more.

The Barcelona Inheritance: The Evolution of Winning Soccer Tactics from Cruyff to Guardiola

From Cruyff’s “Total Football” to the epic rivalry between Guardiola and Mourinho, a gripping chronicle of the rise and fall of Barcelona’s dominance in world soccer.

Barcelona’s style of play – pressing and possessing – is the single biggest influence on modern soccer. In The Barcelona Inheritance, Jonathan Wilson reveals how and why this came to pass, offering a deep analysis of the evolution of soccer tactics and style.

In the late 1990s, Johan Cruyff’s Dream Team was disintegrating and the revolutionary manager had departed, but his style gave birth to a new generation of thinkers, including Pep Guardiola and José Mourinho. Today, their teams are first and second in the Premier League, marking the latest installment in a rivalry that can be traced back 25 years.

The Barcelona Inheritance is a book about the tactics, the personalities, the friendships, and, in one case, an apocalyptic falling-out that continue to shape the game today.

Red Card: How the U.S. Blew the Whistle on the World’s Biggest Sports Scandal 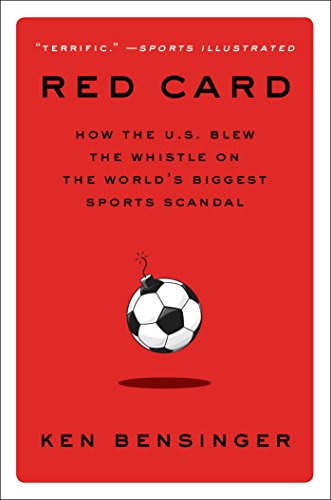 The definitive, shocking account of the FIFA scandal—the biggest international corruption case of recent years, spearheaded by US investigators, involving dozens of countries, and implicating nearly every aspect of the world’s most popular sport, soccer, including its biggest event, the World Cup.

The FIFA case began small, boosted by an IRS agent’s review of an American soccer official’s tax returns. But that humble investigation eventually led to a huge worldwide corruption scandal that crossed continents and reached the highest levels of the soccer’s world governing body in Switzerland.

In Red Card, Ken Bensinger explores the case, and the personalities behind it, in vivid detail. There’s Chuck Blazer, a high-living soccer dad who ascended to the highest ranks of the sport while creaming millions from its coffers; Jack Warner, a Trinidadian soccer official whose lust for power was matched only by his boundless greed; and the sport’s most powerful man, FIFA president Sepp Blatter, who held on to his position at any cost even as soccer rotted from the inside out.

Remarkably, this corruption existed for decades before American law enforcement officials began to secretly dig, finally revealing that nearly every aspect of the planet’s favorite sport was corrupted by bribes, kickbacks, fraud, and money laundering. Not even the World Cup, the most-watched sporting event in history, was safe from the thick web of corruption, as powerful FIFA officials extracted their bribes at every turn. Arriving just in time for the 2018 World Cup, Red Card goes beyond the headlines to bring the real story to light, accompanying the determined American prosecutors and special agents who uncovered what proved to be not only the biggest scandal in sports history, but one of the biggest international corruption cases ever. And it is far from over.

The Club: How the English Premier League Became the Wildest, Richest, Most Disruptive Force in Sports

The Club is the previously untold inside story of how English soccer’s Premier League became the wildest, richest, most popular sports product on the planet.

This is a sports and business tale of how money, ambition, and twenty-five years of drama remade an ancient institution into a twenty-first-century entertainment empire. No one knew it when their experiment began, but without any particular genius or acumen, the motley cast of billionaires and hucksters behind the modern Premier League struck gold.

Pretty soon, everyone wanted to try their luck, from Russian oligarchs to Emirati sheikhs, American tycoons, and Asian Tiger titans. Some succeeded beyond their wildest dreams. Some lost everything. Today, players are sold for tens of millions, clubs are valued in the billions, and games are beamed out to nearly two hundred countries, all while the league struggles to preserve its English soul.

Deeply researched and drawing on one hundred exclusive interviews, including the key decision makers at every major English team, The Club is the definitive and wildly entertaining narrative of how the Premier League took over the world.

The Boys in the Cave: Deep Inside the Impossible Rescue in Thailand

From award-winning ABC News Chief National Correspondent Matt Gutman, and written using exclusive interviews and information comes the definitive account of the dramatic story that gripped the world: the miracle rescue of twelve boys and their soccer coach trapped in a flooded cave miles underground for nearly three weeks—a pulse-pounding page-turner by a reporter who was there every step of their journey out.

After a practice in June 2018, a Thai soccer coach took a dozen of his young players to explore a famous but flood-prone cave. It was one of the boys’ birthday, but neither he nor the dozen resurfaced. Worried parents and rescuers flocked to the mouth of a cave that seemed to have swallowed the boys without a trace. Ranging in age from eleven to sixteen, the boys were all members of the Wild Boars soccer team. When water unexpectedly inundated the cave, blocking their escape, they retreated deeper inside, taking shelter in a side cavern. While the world feared them dead, the thirteen young souls survived by licking the condensation off the cave’s walls, meditating, and huddling together for warmth.

In this thrilling account, ABC News Chief National Correspondent Matt Gutman recounts this amazing story in depth and from every angle, exploring their time in the cave, the failed plans and human mistakes that nearly doomed them, and the daring mission that ultimately saved them. Gutman introduces the elite team of volunteer divers who risked death to execute a plan so risky that its American planners admitted, “for us, success would have meant getting just one boy out alive.” He takes you inside the meetings where life and death decisions were grimly made and describes how these heroes pulled off an improbable rescue under immense pressure, with the boys’ desperate parents and the entire world watching. One of the largest rescues in history was in doubt until the very last moment.

Matt Gutman covered the story intensively, went deep inside the caves himself, and interviewed dozens of rescuers, experts and eye-witnessed around the world. The result is this pulse-pounding page-turner that vividly recreates this extraordinary event in all its intensity—and documents the ingenuity and sacrifice it took to succeed.

The Away Game: The Epic Search for Soccer’s Next Superstars

Over the past decade, an audacious program called Football Dreams has held tryouts for millions of 13-year-old boys across Africa looking for soccer’s next superstars. Led by the Spanish scout who helped launch Lionel Messi’s career at Barcelona and funded by the desert kingdom of Qatar, the program has chosen a handful of boys each year to train to become professionals―a process over a thousand times more selective than getting into Harvard.

In The Away Game, reporter Sebastian Abbot follows a small group of the boys as they are discovered on dirt fields across Africa, join the glittering academy in Doha where they train, and compete for the chance to gain fame and fortune at Europe’s top clubs. We meet Diawandou, a skilled Senegalese defender whose composure makes him a natural leader on the field; Hamza, a midfielder from Ghana with great talent but a mercurial personality to match; Ibrahima, a towering striker who scores goals by the bucketload; Serigne Mbaye, who glides by players effortlessly but happens to be deaf; and Bernard, often the smallest kid on the field but a sublime playmaker who invites constant comparison to Messi.

Abbot masterfully weaves together the dramatic story of the boys’ journey with an exploration of the art and science of trying to spot talent at such a young age. As in so many other sports, data analytics in soccer have expanded in the wake of Moneyball, with scouts employing more sophisticated metrics like “expected goals” and tracking data to judge players. But, as The Away Game chronicles, soccer genius depends more on intangible qualities like “game intelligence” than on easily quantifiable ones.

Richly reported and deeply moving, The Away Game is set against the geopolitical backdrop of Qatar’s rise from an impoverished patch of desert to an immensely rich nation determined to buy a place on the international stage. It is an unforgettable story of the joy and pain these talented African boys experience as they chase their dreams in a dizzying world of rich Arab sheikhs, money-hungry agents, and soccer-mad European fans.