The last time when France hosted the European Championships was in 1984. Les Bleus won all five games and eventually lifted the trophy. There is a lot of expectation of a repeat performance that currently rests on the shoulders of Paul Pogba and his teammates. Expectations however can do strange things to people.

The opener of a tournament is always unpredictable and never easy. In 2002, France, the World Champions lost to Senegal. In 2008, France, the finalists of the previous World Cup, were held to a goalless draw by Romania. The first match of Euro 2016, brought Romania once again, against the tournament’s hosts. “Tricolorii” don’t have the unknown talents that Senegal had in 2002 (El-Hadji Diouf, Papa Bouba Diop) and no longer have a head-coach capable to park the bus like Victor Pițurcă did in 2008. The Romanians, once known the Brazilians of Europe, no longer have the likes of Gheorghe Hagi, Dan Petrescu, Adrian Mutu or Cristian Chivu and the chances of a surprise were pretty slim. You could have asked anyone before the Euros and all the football fans would have predicted an easy win for France.

The match between France and Romania from Euro 2008 was one of the ugliest matches of that tournament. “Tricolorii” adopted a very defensive approach, closed down spaces, did not had a single shot on target but gained one point after a goalless draw. After the match, despite the fact that we won an important point, everyone in our country heavily criticised Victor Pițurcă’s tactics, reproaching him that after that game.

Before Friday’s match, the general opinion in Romania was that we need to play attractive football and to not repeat the same ugly performance that ashamed many of the people around here.

Anghel Iordanescu had a tough decision to take. To listen to what our football fans after our last Euros or to hang on to his ideas and to continue with the approach from the qualifiers, focused on defense and counterattack, a similar approach to the one displayed by Pițurcă’s team against France in 2008.

Sometimes, persistency can be the key. Tricolorii entered on the Stade de France with the same determination and showed the same hard-work and defensive organisation that they had shown 8 years ago in Switzerland. However, the Romanians didn’t sit too deep and tried to press each time the occasion arose, attempting to close down Pogba and Matuidi as soon as possible. When having the ball, Romania’s approach looked similar to Chelsea’s approach under Mourinho at Anfield against Liverpool in 2014, when the Blues won with goals from Demba Ba and Willian. With Hoban, Pintilii and Stanciu against Kante, Matuidi and Pogba, Tricolorii had no intention to play the ball through the middle, wanting to avoid any potential mistakes in the centre of the pitch.

The above image clearly shows pattern of the final third passes from Romania. While the defenders were focused and on top of their game, the midfielders did not make silly mistakes with the ball, focusing only on playing long balls on the wing and on quickly positioning correctly to recover the second ball. Backed by a shy display from Griezmann and Pogba, Iordănescu’s tactics were quite effective Friday night..

Most of us predicted a comfortable win for “Les Bleus”, but no-one one expected that “Tricolorii” can ruin France’s party. Romania could have been ahead after just a few minutes but Bogdan Stancu had an unbelievable miss which was hit straight at Hugo Lloris. Although, the Romanians had only 2 shots on target, they did create several problems to Didier Deschamps’ team.

Dimitri Payet was France’s hero however. “Les Bleus” left it late and scored after a piece of individual brilliance by the best player from the pitch.  It was enough for France to secure the three points but Iordănescu and his team deserve to be praised for their hard-work, having won our hearts. 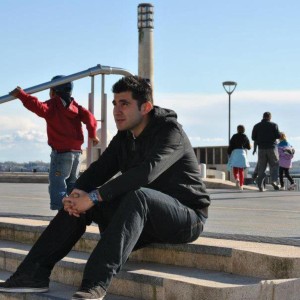 "Alex works in the IT Industry but always had a passion for writing. He supports Arsenal FC and also follows the fortunes of Steaua Bucharest. Based in Iasi,Romania, he's a coffee lover and a fan of almost everything that has a guitar and a British accent. "
All Posts