Discount Football Kits take a close look at the semi-final of the confederations cup and how Italy looked to set up against Spain.
For their Confederations Cup semi-final against Spain, Italy reverted back to what many would consider a typically Italian defensive outlook.
Their use of the three-man defence during Euro 2012 was superb, using it to secure a 1-1 draw with Spain in their first Group Stage game. They went on to best England and Germany, before switching back to a midfield diamond for the final.
The switch failed, and in conjunction with the Azzurri being reduced to 10 men early on, Spain found the weak point in their midfield structure and punished them ruthlessly.
With the 4-0 thumping in Kiev fresh in the memory, Prandelli shuffled his pack and produced a curious, lopsided 3-4-3 formation. The goal was to nullify Spain’s overwhelming central presence and take advantage of the gung-ho full-backs. By all accounts it was absolutely superb.

Switching it up
The formation move was both widely anticipated and necessary.
The shambolic performances from the back line throughout the Confederations Cup to date enforced some kind of change, and the four-man variant would have likely been battered by a rampant, goal-friendly Spain. 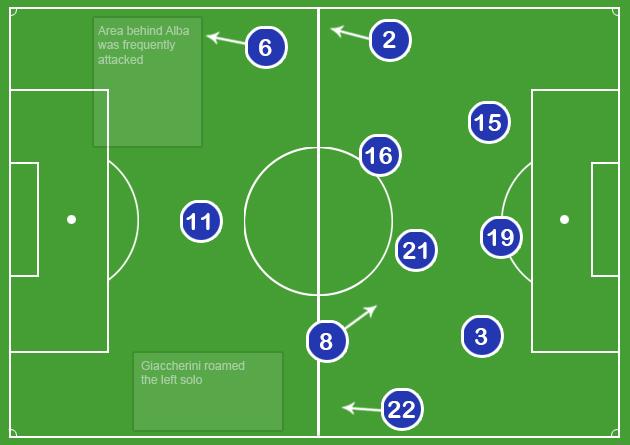 Switching to a 3-4-3 reunited Juventus trio Andrea Barzagli, Giorgio Chiellini and Leonardo Bonucci in central defence and brought balance to the side—as good as Barzagli is, he looked uncomfortable and slow in a two-man line, a system not suited to his strengths.
With energetic wing-backs in Christian Maggio and Emmanuele Giaccherini to cover the flanks, Prandelli felt he had devised an efficient formation not only to nullify Spain, but also to prey on their weaknesses.

Attack the space
The formation was lopsided by Prandelli’s construction.
It favoured the right-hand side and focused on attacking the space behind Jordi Alba, who would frequently bomb forward from left-back and join Spain’s attacks.
Antonio Candreva was a surprise selection on paper, but teaming up with Christian Maggio as a right-wing-back/right-wing duo, they gave the Barcelona man a torrid time.
Alba’s defensive skill set has been brought into question on a number of occasions since joining the Catalan outfit, and this is 120 minutes he won’t want to watch back.
The Spaniard soon began less inclined to steam forward, as each time he did so, Italy would play a ball over the top or into Candreva and let their energetic wide men do the work.
On the other side, Emmanuele Giaccherini played a more isolated role as left-wing-back, and without a winger in front of him (Claudio Marchisio tucked inside) relied largely on quick switches of play to get into the game.
The system, built on explosive counterattacks that put one man vs. another in a battle of determination and speed, was perfect, and Italy should have been 3-0 up at half time.

Nullification
It should be on record that Spain have rarely looked this bad. Little movement off the ball, no energy to make runs and zero pressing meant Italy enjoyed a whopping 47 percent possession.
Be it heat, humidity or respect for Andrea Pirlo and Daniele De Rossi’s passing range, la Roja’s lack of willingness to press the man in possession  was truly astonishing.
Even still, Italy’s work throughout the semifinal was first-class, and even a sub-par Spain side represent a formidable challenge.
So how has Prandelli’s three-man line nullified Spain twice in a row?
The secret is the understanding the central defenders have, with greater numbers allowing greater fluidity and ability to be proactive in cutting out danger.
Of the three central defenders Italy utilised, two would keep the line and one would step out and intercept. Barzagli is the better of the centre-backs and reads the game superbly, and he would often venture forward to intercept or close down a runner.
That left Chiellini and Bonucci to track late runs or dribbling threats, while also remaining aerially dominant as the last line of defence.
In a four-man line that’s lunacy, but Italy’s system allows one player that freedom to gamble. 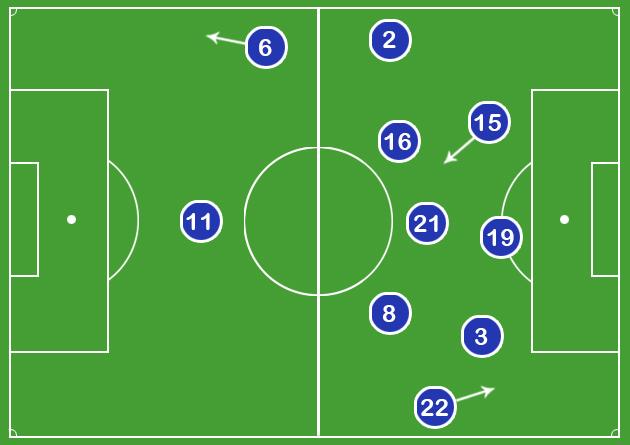 The shifting of the defence was also extremely important. Giaccherini would drop in at left-back to form a line of four (with Barzagli on the right) or five (with Maggio on the right), allowing Italy’s midfield a platform to hound the central midfield area and win back possession.
It often left Italy with no one manning the left flank—a surprise to some, considering Alvaro Arbeloa is a weak link—but Alba was the avenue Prandelli had chosen to attack.
Candreva was always free to receive the ball and run at Alba with Maggio eager to join him, while De Rossi’s passing out of defence in the second half meant Spain could not key in on Pirlo as the sole threat.

Conclusion
Many will ask “have Italy finally found the method to beat Spain?” and the truth is they found it one year ago in Gdansk.
Prandelli should have played his 3-5-2 in the final at Euro 2012 but made a severe tactical blunder, and this was his chance to right the wrongs.
It was so close to working, and were it not for the luck of draw in penalties and some serious profligacy throughout, the Azzurri would be preparing for the final.