Nearly 2 and a half years have passed since Xavi Hernandez took over the reins at the Qatari club, Al Sadd. During that time, the interest in Xavi’s career mostly stemmed from fans all over the world asking the same question; is Xavi a suitable manager for FC Barcelona?  Almost 2 years ago, I wrote a review of Xavi’s first season and deeply criticized his approach to Al Sadd’s team of superstars and how he fumbled the tactics around an attacking duo that scored a combined 65 goals in 22 matches the season before. Then around 6 months ago, I wrote another review of Xavi’s Al Sadd, where I praised him for his overwhelmingly successful second season. Now that Xavi is closer than ever to becoming the next manager of Barca, it is a fitting time to examine his career at Al Sadd and how his tactical approach would fit a weakened Barca.

Our man himself has featured in an excellent video where he explains his tactical setup in a very clear manner. In short, he currently utilises a possession-heavy 3-2-4-1 shape(image below) that is very geared towards winning the ball high up the pitch and then quickly creating space for the “4” in his 3-2-4-1 between the opponent’s midfield and attack. 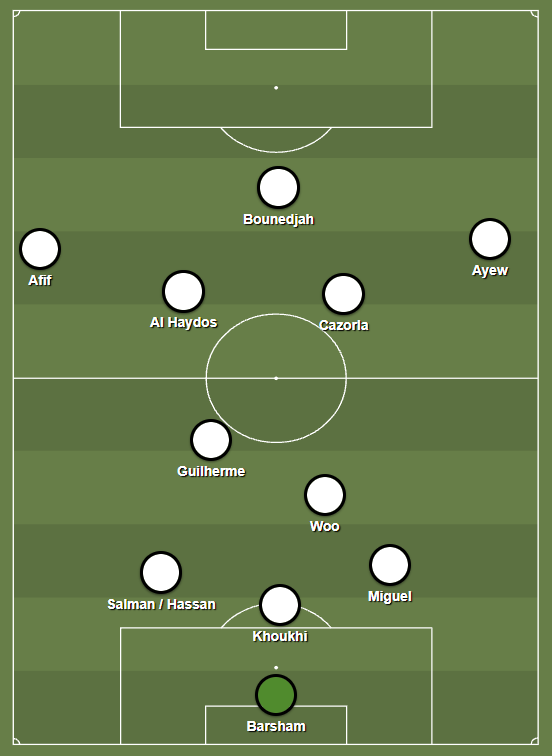 That is a quite recent change, as he last season preferred versatile midfielder Mohammed Waad, creating a 3-4-3-ish shape(image below) that is even more “Cruyffian” than his current tactical setup. 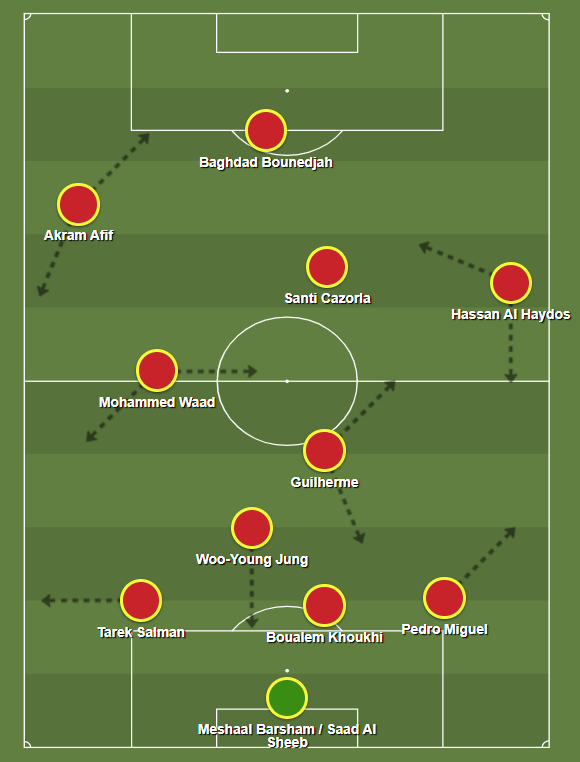 Waad would shuttle wide from the LCM spot in the defensive transition phase and play more as a LB, while pushing up in the left half space when Al Sadd had possession. This year, Xavi has settled on the 3-2-4-1 as he wanted to accommodate both Club Captain Al Haydos and Ayew in important attacking roles. So essentially Xavi lines up now with 5 pure attacking players, with Guilherme in a role that can be best described as Carrilero in FM21 terms. Cazorla in particular is vital for finding that space in the half space and for general chance creation. Akram Afif on the left wing is one of Asia’s best players and is an impeccable playmaker that can cut it in Europe’s top leagues. His diagonal runs combined with Bounedjah’s unconventional movement and Cazorla’s playmaking generally creates the lion’s share of Al Sadd’s major chances. This setup has created some incredible moments that are genuinely Barca-esque in how the ball progresses with crisp passing. This goal by Bounedjah definitely shows the beauty of Xavi’s system when it works.

When you watch the goal that I linked above once, you will say to yourself, “damn that’s a nicely worked goal”. When you watch it more than once, you will notice that the opponent’s defence and midfield absolutely suck, and you will be completely right. Basically, player registration rules in Qatar allow for three foreign players that can be from anywhere in the world, one foreign player from an AFC member country, and then one additional foreign player from an Arab nation. In Al Sadd’s case, Guilherme, Ayew and Cazorla are the three open spot foreign players, Woo is the Asian player, and Bounedjah is the Arab player. That leaves around 15-20 other players in the squad who are all Qataris. The thing is that Qatar is a country where less than 350 000 people are actually citizens, which means that the player pool is extremely small. Since Qatar’s extraordinary Asian Cup win almost three years ago, national team manager Felix Sanchez has introduced just 2-3 new players that have managed to compete for spots in Qatar’s starting XI. Essentially, there are not more than 16 players in Qatar that I would consider good enough to play on a decent Asian level. From those 16 players, 9 of them already play for Al Sadd. Another 5 play for rivals Al Duhail, and the remaining two play for fallen giants Al Gharrafa and Al Rayyan. That means that an overwhelming majority of players for other Qatari clubs are simply awful.

It is fair to say that domestic opposition in Qatar just can’t be taken seriously apart from the Al Duhail matches that occur 3-4 times per year if we count both league and cup matches. The real measure becomes the AFC Champions League in Xavi’s case, and I’m sad to say that he has spectacularly failed in three attempts so far. In the ACL, he often struggles against well-drilled defences that won’t just fall apart in a similar manner to how domestic opposition usually does. In his first season, Xavi weirdly decided to keep a 3-2-3-1 shape against Asian powerhouses Al Hilal despite getting an early red card, which led to Al Sadd conceding 4 at home. His team valiantly fought in the away leg, but the home loss was too much to overturn. In his second season, Al Sadd were again eliminated at home in the Ro16 after a disappointing performance against Iranian side Persepolis, where he again didn’t adapt to the organised defensive structure of Persepolis, which resulted in a limp performance where Al Sadd barely created anything before conceding a late goal from an Iranian set piece. In his third and what might be his final attempt at winning the ACL, Al Sadd were eliminated in the group stages after losing two matches to Saudi powerhouses Al Nassr. In both matches, Al Sadd were shell-shocked by an opponent that counterattacked competently and exploited the massive spaces left by Xavi’s aggressive counterpressing. Al Sadd also noticeably struggled with the idea of not having 60%< possession and they looked clueless without the ball for longer periods. The wingers were not well-equipped enough defensively to defend wide as “normal” wingbacks do in a back three, which led to Al Nassr easily moving the ball to wide spaces and overwhelming the wide spaces in Al Sadd’s 3-2 configuration in defence.

Now we take a little step back and simply imagine how Xavi could translate his Al Sadd tactics to Barca while keeping the same “profile” of players in the same spots. Ter Stegen is Meshal Barsham, nothing too weird there. For the LCB and RCB spots, Tarek Salman, Pedro Miguel and Abdulkarim Hassan for Al Sadd are players who are very comfortable wide and the latter two were fullbacks before Xavi converted them. In Barca’s case, Mingueza is probably the closest thing to Pedro Miguel, but there are no other fitting players for the LCB spot other than Lenglet and Umtiti. In the middle playmaking CB spot, Araújo is more fitting than Pique, as Xavi’s system requires a player that is fast and reliable in pace duels, which is sadly no longer applicable for Pique.

In midfield, Sergio Busquets could work perfectly in the Woo role, as a progressive passer that drops deep to collect the ball and quickly distribute it. De Jong also works perfectly in the Guilherme role and he would definitely excel at moving the ball quickly from Busquets to the line of attacking 4. For the wing spots, only Fati, Dembélé and Depay could work there. Pedri must become Cazorla, no one other than him could work in such an important role. Coutinho or Gavi could be accommodated in the Hassan Al Haydos position, but Xavi would have to massively change the function of that role. That leaves Agüero as the obvious Bounedjah, a player with a knack for opening space and being reliable in the box.

Xavi’s current approach completely excludes traditional wingbacks/fullbacks, which leaves the likes of Dest and Alba outside the setup. Hassan and Miguel became CBs at Al Sadd, but Alba and Dest are more the type of players that would feature as wingers in Xavi’s 3-2-4-1.

Xavi has done a great job with dismantling Al Sadd’s domestic opposition and should be applauded for that. On the other hand, his approach has been not very adjustable for matches where Al Sadd weren’t overwhelming favourites. It’s a style that I would unquestionably enjoy watching for a club like Bayern or Ajax, where the squad is vastly superior to any other club in the league and is almost guaranteed to keep the ball for extended periods in any match. Barca are simply not expected to dominate as they did just 3-4 years ago anymore, which means that the Xavi’s approach will simply become suicidal as well-drilled counterattacking teams would easily exploit the spaces in Barca’s “future” midfield.

From a “Barca-DNA” perspective, Xavi is undoubtedly a fitting manager in my opinion, but perhaps it is a fitting time for Barca to rethink their principles after Koeman’s spell. With a Barca side that is spending more and more time as an “underdog” in top matches, it can be argued that a manager with a hyper-attacking mindset and a clear weakness in his approach without the ball is not the right pick. Al Sadd won 6-4 a few weeks ago, but the sheer attacking force that can produce six goals despite conceding four simply does not exist right now in Barca. The next Barca manager will not have an easy job anyway, and I’m not sure that Xavi is the right man, especially considering that he’s jumping from a side that is undisputedly number 1 in their league, to a struggling side that is under all pressure.

TL;DR: Xavi is a good manager when it comes to creating a domestic monster that crushes smaller sides, but Barca don’t have the tools to become monsters and I’m not sure that Xavi is adaptable enough to overcome Barca’s lack of tools.