Lionel Messi’s 2014/15 season ended so well that it’s probably easy to forget the doubts that were lingering around him at the beginning; doubts that he was or could be the player he was in the 2012 season, there were thoughts that he was in decline. Over the season, he did show that he has changed as a player, but not necessarily for the worse. Here are some of the distilled moments that I think showed how he was changing, and how he was critical to the success of his team.

Some of these moments are more subtle and were easily forgotten, some were more prominent and of those I tried to show those from a new angle, since we might have seen the same old ones too many times. I hope you enjoy it.

Looking back now, I think this is when people started to see how Messi was taking on a more creative role at Barcelona and passing on a lot of the finishing to other forwards. This is also when we began to see how Messi had likely been mentoring Neymar. A nice detail is that after Messi makes his pass, he just waits there by the post, calm and confident as Neymar executes the play.

Barça lost against PSG, Real Madrid, and Celta and then Messi had a few weeks of uncharacteristic misses. People were starting to feel like this was going to be a rough transitional season for Barcelona, the talk about Messi passing his peak intensified. Then Messi and the rest of the team played a strong game against Sevilla starting with this picture-perfect free kick goal — the first in a hat-trick that broke Zarra’s record for most goals in La Liga and set the new one. Speculation that Messi might not be as good was brought into question and Barcelona won against a strong team for the first time in the season.

Another Messi moment came at the end of the match as Xavi insisted that the bashful Messi go back out and get some love from the fans.

In the last minutes of the last game of the year came this little goal. It was the fifth in a 5-0 win, so not significant for the scoreline, however people were still mumbling that Messi didn’t quite have the same spark of true goal brilliance that was known for before the 2013/2014 season. 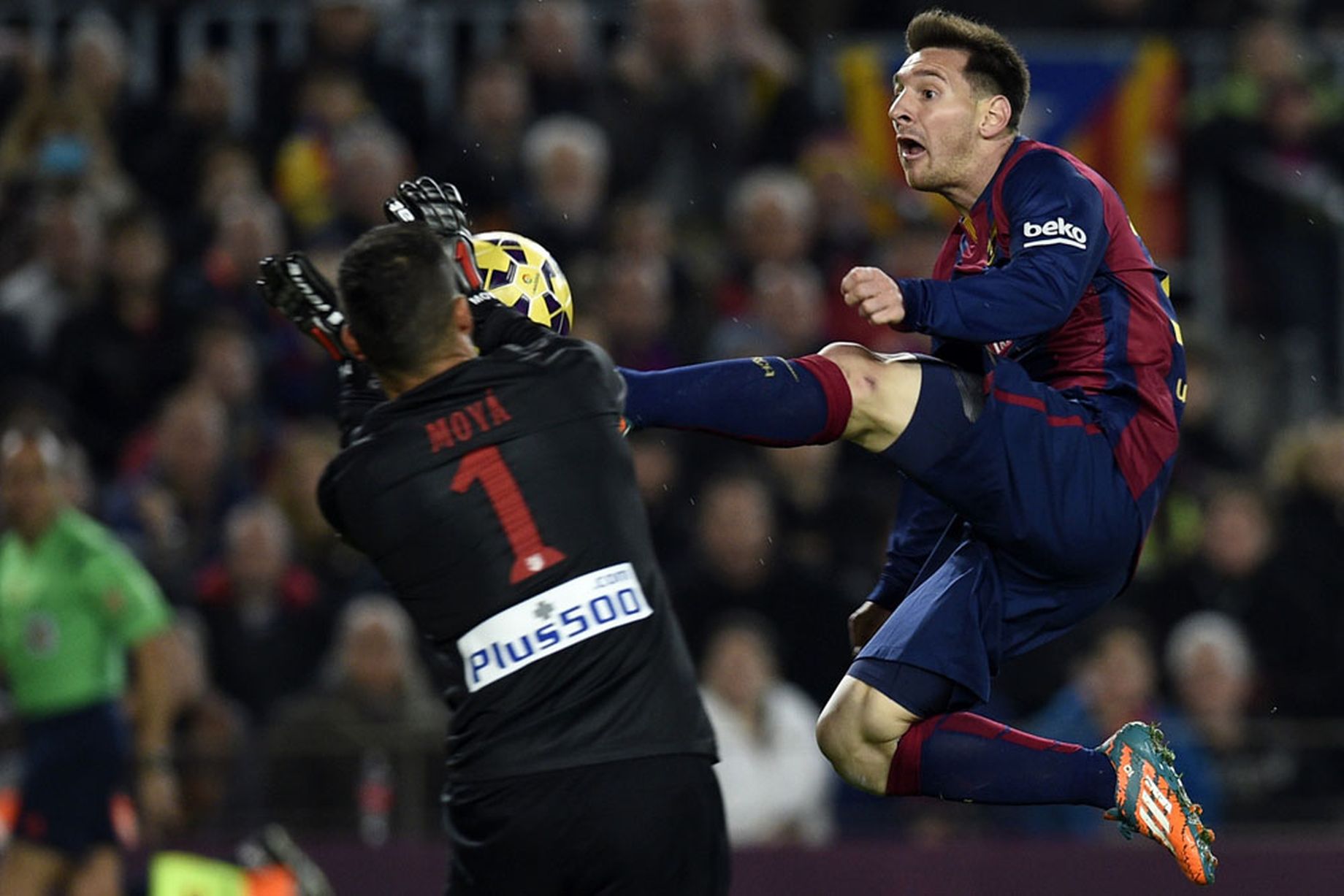 For the first match against Atlético that season, the lingering image for many is of the Messi, Neymar, and Suarez happily celebrating together after Messi’s  goal . (Which was nice on it’s own — I mean, who slide tackles and then immediately scores?) But for me, that image is what I recall. The disappointment of the loss against Real Sociedad had just been a week before, and people everywhere were talking about the “crisis” at Barcelona. But in this match, Messi came out of the gate and played like a man possessed. He was an aggressive version of himself that people had not seen in a while, or maybe ever. This was the first match Barcelona had been able to win against Atlético in three years.

(5) Messi sets up this play with a classic diagonal arcing pass, and completes it with a right-footed goal for the winner, Villarreal, 1 February 2015 .

Barcelona was suffering against Villarreal, coming from behind. This goal was the winner and, I think, the quintessential example of the “new” Messi. Not too much new in its parts, except maybe the right-footed goal, but putting it all together like that showed he could step up on any part of the front third of the pitch or even further back. This was a period when Neymar’s finishing was a bit off and before Suárez had hit his stride again for scoring. Barcelona was also still struggling a bit in the midfield without Xavi most of the time and with Iniesta adjusting to the new system. Messi held a lot together with his creativity further back and going forward to finish — sometimes in the same play, as shown here. That hyper-accurate arcing pass from the the right is now an iconic move from Messi, and he finished the season with far more right footed goals and headers than in any season previous.

(6) Messi clears-up some last doubts about his abilities, Pep sees a glimpse of his own near-future, Man City, 18 Mar 2015 .

This one needs no additional commentary, in the words of Guardiola himself about Messi: “Don’t write about him. Don’t try to describe him: watch him.”

Messi is on a hat-trick during the match with Córdoba, and tied with Ronaldo for the Pichichi award, when the opportunity to finish it comes with a penalty. However, Neymar had not scored during the match and Suárez already had three. Many said this was a charitable act towards Neymar, and while I have no doubt that Messi has a special place in his heart for this kid, it also shows that his eyes were on the real prize: team trophies. Neymar had been in a rough patch for a while and clearly needed a boost. A more confident Neymar meant a better chance at silverware. After this match, Neymar scored 6 more goals in 7 games, 4 of which were in the Champions League. Messi lost the Pichichi but won the treble. (I particularly like how confident Messi looks in this moment.)

The tie with Bayern represented the toughest match-up for Barcelona and maybe the entire tournament. Barcelona had the upper hand for the first 15 minutes of the match but failed to score due to the great defense and then Bayern quickly regrouped. After that point the match was intense but very even. It was still 0-0 until this moment here in the 77th minute when Messi broke the deadlock and scored. After that moment, the game, the tie, and the tournament changed in favor of Barcelona.

This moment was the turning point for this match, and for Champions League of 2015 and it also cleared the way for Messi to return only a few minutes after to make one of the most talked-about goals of the season

(9) Messi nutmegs Godín and makes him eat grass with this classic beauty that won Barcelona the league[16] , and all rejoice, Atlético Madrid, 17 May 2015

Despite a dominant performance against Bayern at Camp Nou a week or so earlier, with Suárez finally scoring at full strength, Messi eased back into a more creative role in the later part of the season and was going forward less — leaving more and more of the finishing to Neymar and Luis. However, with Suárez injured for this match, and the potential to win the league on the line, Messi put on his scoring boots for this nice one, a classic of his type.