Marseille 2-1 Lorient:Cheyrou wins it for Marseille It’s not so often that you see two 4-4-2s pitted against each other these days, but this was the case as Marseille snatched a 2-1 win over Lorient. This game nicely illustrates Jonathan Wilson’s point that: “Formations are neutral; it is their application that gives them positive or negative qualities.”
BBC African Player of the Year André Ayew was unavailable for OM, although his brother Jordan started upfront alongside Loïc Rémy. Jérémy Morel and Morgan Amalfitano lined up against the club they left in the summer. Lorient lined up as expected, except for Mathias Autret starting on the right in the place of Yann Jouffre. Kick and rush?
The start of the match was frantic, both teams looking to bypass the creative zone with long balls. This can be a feature of teams playing 4-4-2; with less obvious short passing options than a single-striker formation, getting the ball straight to wingers and forwards or behind the defence. But in this instance, the teams had enough quality and avoided a “kick and rush” game; Lorient putting together some neat passes once the game settled, before Marseille grew into the game following Lamine Koné’s 32nd minute sending-off and finished with 66% possession.
Left midfielders cut inside
Rather than simply playing flying wingers, both teams mixed it up on the flanks to good effect. The right-sided players on either team, Amalfitano and Autret, did stay in position out wide and offered a direct crossing threat. However, Mathieu Valbuena would wander in from Marseille’s left, often ending up on the opposite flank to create an overload (much like Silva and Milner have been doing at Manchester City). On Lorient’s left flank, Mathieu Coutadeur would drift into the middle to replicate the numerical advantage gained from playing three in the centre and was a great influence on his side’s attacking play in the first half. As a knock-on effect, both left-backs (Morel and Mareque) had a tendency to drift forward on the overlap.
The difference in the movement of the left-sided players and their right-sided counterparts is evident from the heat maps below. 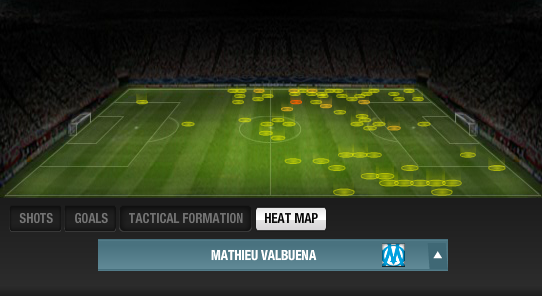 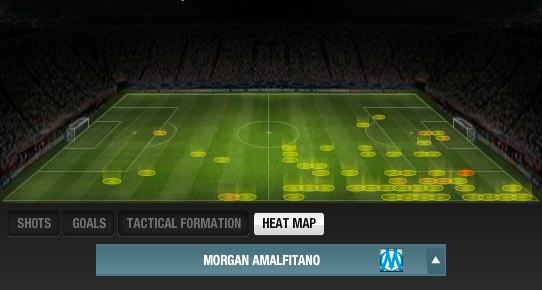 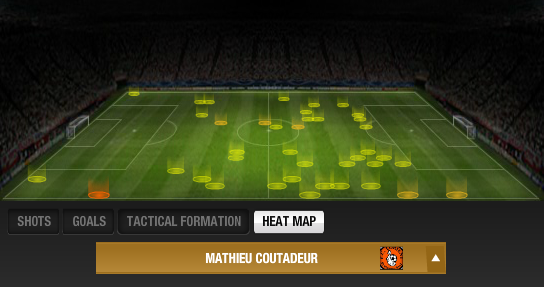 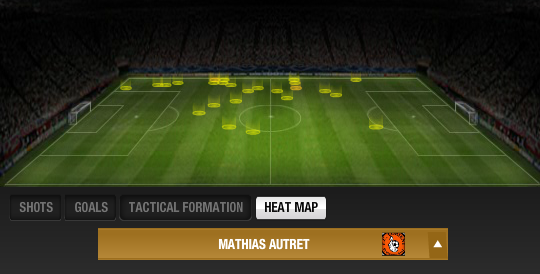 How to defend without a holder
It was easy to see which team was more used to playing in a 4-4-2 shape. Lorient stayed compact throughout the game, with the defensive line never far from the midfield. This caused the defence to push up when Lorient had the ball which may have cost them, as Rémy had space to run in behind the defence, forcing Koné to haul him down. However, the general result had been to deny Marseille space between the lines.
The home side allowed too much of this space to Coutadeur to play through balls in the first half. It was clear that the defence are used to having a holding midfielder sweeping up in front of them, so sat back a bit, but having only two in the centre meant they had less protection. Alou Diarra and Stephane M’bia are both players who are comfortable at sitting in front of the defence, but were troubled by Lorient’s passing and got drawn higher up the pitch (as well as having more responsibility to get forward than in, say, a 4-2-3-1).
Compare this with Lorient’s approach when Marseille dominated in the second half. They formed two banks of four and the central midfielders stationed themselves close to the deeper defence. While this standing off could have been punished if Marseille had someone who could provide creativity from deep, they were successful in stifling Marseille’s attacking play until late on.
Fluidity key in attack
Rather than the traditional strike partnerships of yore (big man-little man, creator-poacher etc.), some of the teams of today who use two centre-forwards will play a style in which neither of them acts as a focal point. Instead, they drop off into space between the lines to create chances for the attacking midfielders or their partner, almost like playing with a pair of false nines. Think, for example, of the Rooney-Tevez partnership at Manchester United (which Ferguson could be trying to recreate with Danny Welback). Other prominent examples are the Aguëro-Balotelli partnership at City and Rossi-Cassano for Italy.
The duo of Kevin Monnet-Paquet and Joel Campbell, while lacking the ability of those players, worked to similar effect here. Monnet-Paquet was very lively, dropping into the hole to link Lorient’s play and moving out to the wing to provide width when Coutadeur came inside. Campbell, on loan from Arsenal, played more like a proper no.9 but liked to drift to the right before cutting in.
This fluidity is a feature throughout Christian Gourcuff’s side and allowed them to put together some wonderful passing triangles, playing their way out of defence and creating chances to slip through balls to onrushing players. The succession of neat lay-offs from their slick passing moves sent Jean-Alaixys Romao through in the first half and he should have squared for one of his team-mates to score. Unfortunately for Lorient, going to ten men severely compromised their ability to put attacking combinations together. Going to 4-4-1, with Romao filling in at centre-back and Monnet-Paque to the left wing, they didn’t offer enough support for Campbell.
Marseille, meanwhile, looked ponderous in attacking even when dominating. Ayew and Rémy didn’t do enough to link the play. Deschamps could have changed to a formation involving an extra midfielder to provide creativity, but perhaps this is one of the trappings of playing 4-4-2 when going after a goal; reducing the amount of strikers you have feels like a backward move. Anyway, Marseille often struggled for ideas and would often resort to getting their full-backs to cross hopefully from deep.
Individuals settle game
Why is 4-4-2 is so well-loved in England? Could it be that the country which, more than any in Europe, values individuality (rather than the collective) likes to see a system in which individual players makes the difference? Whether that’s complete bollocks or not, some would argue that such a simple tactical match-up makes for a game settled by individual contributions rather than tactical wizardry.
First, Innocent Emeghara (on for Campbell) latched on to a long ball then beat Diarra and Mandanda to give Lorient the lead on 77 minutes. Seven minutes later, the bright Valbuena finally found some space in behind Lorient’s midfield and placed the ball into the top corner of Fabien Audard’s goal. And in stoppage time, the midfielder’s free-kick was headed home by Benoit Cheyrou (who could have been marked by Romao if he hadn’t been sent off seconds earlier).
At the same time, we’ve already seen complex tactical factors affecting the game and causing it to be more than a simple battle of 4-4-2s. And even if the goals were more down to individual contributions, they can’t be fully separated from tactics – Emeghara only had to beat one defender for his goal because Marseille were pushing forward in an attempt to score.
Marseille dominated the possession and shot statistics and may have won comfortably without a good performance from Audard, but did lack the finesse to create openings for much of the match. The team looks a lot more comfortable with a single striker formation and will surely return to this once the older Ayew brother returns, but need to show more cohesion going forwardif they are to challenge for the Champions League.
As for Lorient, they played some good positive football early on but did not contribute much after going down to ten men (which is understandable at the Stade Velodrome). I’d recommend watching this little-known side if you get the chance; their purist-pleasing style is created by manager Gourcuff despite the limitations of running such a small club. You can see the difference between his coaching ability and the resources available to him when Autret knows exactly where to move in relation to his team-mates, but lacks the basic technique to control the ball once he’s in a good position. Anyway, the Brittany club should be staying the top half and continue to trouble France’s big boys.